Should we shield kids from car crashes?

On the one hand, we have the NRMA sponsoring a travelling troupe that visits schools and puts on very realistic plays about teenagers, speed and the aftermath of serious crashes. That program has won many plaudits, and is seen as effective. Kids, particularly teenagers, need to be confronted with the horror that stupid driving can bring.

On the other hand, we have this:

Sick Sydney entertained by violent crash deaths When a young mother crashed into a tree at Burwood, in Sydney's west, on Monday night her male loved-one ran to the car, pulling at the door in a desperate attempt to try to free her while her head slumped over.

The woman, thought to be in her 30s, died instantly.

Still he pulled at the door as the car started to smoke. He was screaming for help but some of the residents just walked out of their homes and stared. They died as mothers in pyjamas and dressing gowns watched on with dozy toddlers. As teenagers strutted around the crime scene, exhilarated, to see tragedy unfold.

Maybe not - but one could give the crash victims the dignity of dying without spectators, their children in tow, treating crime scenes as movie theatres with snacks and drinks. Because the last thing that the dying victims saw was just that.

Vikki Campion, who wrote that story, has clearly never spent any time in Burwood - parts of it are a wog paradise, and the young wogs carry on in strange and utterly baffling ways. Wog boys between the ages of about 15 and 30 appear to have never been introduced to any of the social niceties that you and I may take for granted. The behaviour described above is no surprise to me. If you don't believe me, go to Burwood Westfield, which contains one of the most toxic concentrations of young wogs known to man.

The reporter, Vikki Campion, seems to have forgotten that she wrote this story just a day before:

It is believed the woman was travelling at about 150km/h along a straight stretch of Burwood Rd, Concord, a 50km/h zone, shortly after 11pm. Thought to be in her mid30s, she initially struck two street signs, dragging them 20m before she hit the tree and the car spun out of control.

Here is what the section of Burwood Rd in question looks like. I cycle up and down this road several times a month - a bike path that I use pops out in Bayview Park at the far end, and I then ride down Burwood Rd a while before turning north or south. It's a nice, flat, long straight stretch of road. Half the time, as I am cycling peacefully down the street, I'll hear the "zeeeep-whoosh" of a turbo-assisted wog chariot coming up behind me, as the stupid bogan driver powers up to 100 miles an hour in a 50 zone. Down near the park, the speed limit is 10km/h. Yes, 10. I'll be tonking through it at 45 on my bike, and cars will go past me like I am standing still. The crash happened down near where the red marker is located. 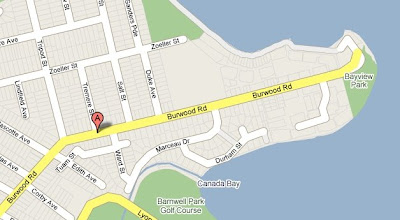 It must have happened on or near this corner. The council or RTA has poured lots of concrete over the years at this intersection to narrow it in order to slow cars down. There is an island down the middle, plus "pinching" islands both sides. They've almost made it too narrow for buses to get through, but I guess they had to get serious in order to slow cars down. They've also put in roundabouts and other islands up the road to mellow the traffic. 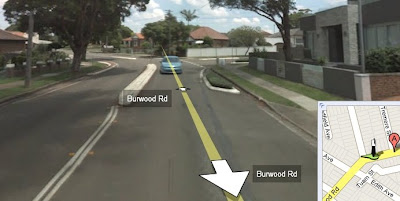 None of those engineering works succeeded in slowing this fool down. I have zero sympathy.

If the rain lets up, I'll think about riding past here and finding exactly where she left the road. I guess she was flying along, then realised there was a corner coming up, braked heavily and lost it. Should have paid for the ABS option. Ah well.

Funnily enough, I was talking to a female friend who was caught in the CBD by the power blackout earlier this week. She said that there were some drivers who were just pigs - traffic had been brought to an utter standstill, but they still tried to aggressively barge in front of other cars in order to get one or two spots ahead, or they drove into intersections when they knew there was no hope of getting across, and stopped in the middle of them, blocking traffic from getting past them from either side.

Speaking of which, I couldn't get across an intersection on the way to work yesterday - traffic was tailed up ahead of me - so I stopped before going across. A bloke came up the parking bays on my left, went around me, and then stopped in the middle of the intersection as the light went red. The annoyed drivers to his left beeped and tooted, and he just sat there like he had done nothing wrong. What a prick.

Anyway, my friend stuck in town said young female drivers were by far the worst.

Her comment: "We never should have given them the vote, or the right to drive".
Badly proofread by Boy on a bike at Wednesday, April 01, 2009

Hi Boy
Sometimes I think kids are sheltered too much from things, and then sometimes I think that they're given way too much information at a young age, too young to make an informed, life-experience decision.

I saw a bad looking accident on the way home last night. A car had skidded and left the road, crashing into a tree. It must have spun as both ends of the car were smashed... I drove past as the towies were trying to get the truck angled to pull the car onto it.

Gave me a bit of a fright in my usual er, rather fast ascent of the Little Liverpool Range from Grandchester.

Luckily the police were there, as it was on a bend and not visible from down or up-hill.