What does this tell you about the chances of a 100mb network succeeding?

From the SMH today:

Telstra's cable network has about 400,000 customers but only about 10 to 15 per cent are believed to have taken up the highest speeds now available of up to 30 megabits per second.

Now have a look at Telstra's current pricing plans for ADSL:

If you graph all those Telstra pricing points and run a trend line through them, you get this: 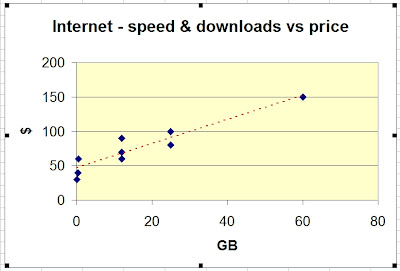 The topmost data points show the ADSL2+ pricing plans, which top out at $150 per month. These are much the same as the Telstra cable pricing plans, which offer up to 30MB download speeds at present. However, the SMH has just told us that only 10-15% are going for the highest speed offerings. The only reason I can see anyone choosing the fastest plan under this pricing policy is because you want to download more than 25GB per month, and the only way to go over that limit is to pay $150 per month for an ADSL2+ plan with the top download rate.

Here are the pricing steps in each plan:

The thing is, downloading data is not free. I believe this is mainly because so much of our internet content comes from the US, and the undersea cables are not cheap to use, and the US internet carriers charge quite a bit for interconnections.

Now there are two ways this 100MB network can play out.

The first option is that people do not change their browsing habits drastically, and are happy to stay on a 12GB plan - which is probably where the bulk are now.

The second option is that this triggers a radical shift in habits, and the move to a 100MB network means that many people migrate to a much bigger download plan. The question is, how big a plan would they need?

I think this question is already a moot point - Telstra has already told us that only 10-15% have moved to the fastest, fattest plan, which matches how I view internet users. There are a small number of geeks who are very heavy users (I have worked with a few of them), there are a reasonable number at the other end of the spectrum who are on 256k links, or even dial-up and are happy with it, and then there is the mass in the middle on a mi-level, reasonably priced plan.

I used to argue with my last geek on a regular basis - he was on the fattest TPG plan, and he was downloading around the clock. He needed terabytes of storage at home to handle his downloads. He was also a mad World of Warcraft game-head, and would sometimes arrive at work not having slept the night before after battling online somethings all night. Senator Conroy and Krudd obviously think that we are all like that, or that we should all become like that.

Geekboy had no kids. I tried to break it to him that when he did start having them, he wouldn't have time for all that. Geeks. They never listen.

But let us look at the pricing graph on the assumption that the likes of you and me mutate into uber-geeks when the fibre rolls in, and we want an all you can eat type of internet plan.

If you read the fine print and FAQs on the Telstra and iiNet sites, they tell you that even on ADSL2+, there are not many people getting over 20MB speeds. Most are in the 10-20MB range.

So let's assume that if you are currently on the fastest plan available, you are getting 15MB maximum speeds. If you speed now goes up 6 times or more to 100MB, how much more download quota will you want?

Well, let's assume 150GB - with all of that being peak, rather than a split of peak and off-peak.

At an average cost of $1.50 per GB, your download quota alone will cost you $225. then you have to factor in the installation and equipment charge. Even if you assume a lowly cost of $50 per month, you are looking at a $275 per month bill.

I'd say most broadband users are currently paying around the $50-70 mark, and are reasonably happy with that. I'm on a $69.95 plan which gives us 12GB per month, and I see no reason to pay an extra $10 per month to go up to a 25GB plan. We get by with 12GB almost every month - what is the point? Should we download movies we don't have time to watch, because we are doing things with the kids?

The only way I can see this thing flying is if the fibre network is expected to replace the free-to-air broadcast TV network, and I can't see that happening. Otherwise, it is going to provide enormous capacity that will never be used.

You could argue that people will be happy to have a 100MB connection and stick with a 12GB monthly plan, but that's like having a Ferrari that you can only drive in first gear. I don't see it working out that way.

So this fibre network offers the following:

By the way, how many households can afford internet plans in the region of $225 per month? The top 5% maybe? The top 1%? If your aim is to deliver fast internet to the greatest number of homes, then you need to deliver affordable plans to those on average weekly earnings or less.

Given that they are talking about this being a wholesale network only, if you want maximum penetration so that every deadbeat and bludger can afford it - which is a political rather than economic aim - you are probably talking about a maximum monthly wholesale charge of $20. About what the copper line rental is now. On that basis, it will take about 1,000 years to pay this network off.

And if my logic has still not persuaded you, try this extrapolation for size: 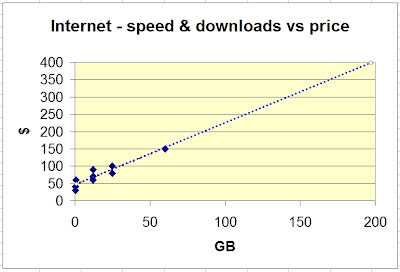 If you follow the trend line, you'll see that a 150GB plan would cost $300 per month using current pricing models - that's about a set of Floyd's balls per month.

Maybe 5% of the population will think about taking up that offer. The economics of this plan suck.

Update - just to be fair, I've added the iiNet pricing as well to the next graph. Note however that iiNet's plans include a mix of peak and off-peak quotas, and I have included both. 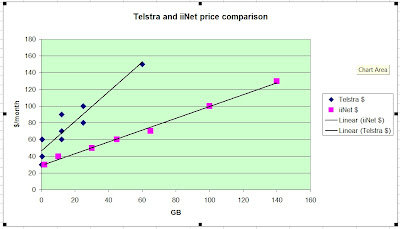 I think the TPG prices need to be taken with a pinch of salt as they do not appear to include monthly line rental charges, which start at $20. 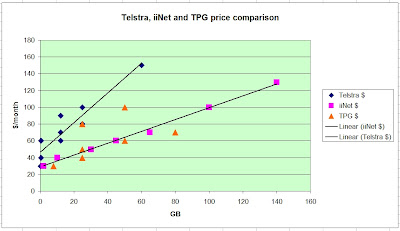 "that's about a set of Floyd's balls per month."

Floyd's Balls... about a set and a half.

I have my net access ADSL thru work, sal sacrifice. It costs me about $20/fn I think for unlimited, low speed (the quality of wire to house means there's not much point getting the faster speed). Plans are changing and I'll have to get a 2G same speed for a slightly less charge eventually.

I can't see anyone paying a sh1tload of money for this new berzillion gig, speed of light service - you're right, who has the money!

Thanks for the entertainment.