I'm over fibre - back to food

We narrowly avoided a culinary disaster today - I pulled out some old-fashioned pork snaggers to defrost for dinner and remembered that we were out of onion jam. Onion jam - onion relish: call it what you will. It is the only accompaniment worth putting on a good sausage or including in a steak sandwich.

If you ever indulge in some proper bangers and mash at a good pub, you'll know what good onion jam/relish should look and taste like. Cheap and nasty pubs slap on awful, grey gravy; but a proper chef will make up a tasty onion jam in advance and dollop it on at the last moment.

I am including this here as a recipe for manly men because this stuff is magic with BBQ's, and men are the natural masters of the BBQ. If you can cook chops and snags and onions on the BBQ, then you can cook this. This is really just a slightly more advanced version of onions done on the BBQ.

What I do with this stuff is that I cook the chops/steaks/snags on the BBQ and just after I remove them from the hot plate, I take the pre-made onion jam out of the fridge and add a big dollop of it to the hot plate. It only needs to swizzle around on the hot plate long enough to reheat and to absorb some of those lovely-chubbly sausage and chop and steak flavours - then off it comes, to be served alongside the snaggers and so forth.

So, to the shops! We returned with 4kg of onions. In the end, I only peeled 3kg of them - and that was only because I figured that the 4th kilo would not fit into my rather large pot. From past experience, I now know to do the peeling and slicing outside on a windy day. The onions are shown here with some of the sage that I will be using a bit later on. 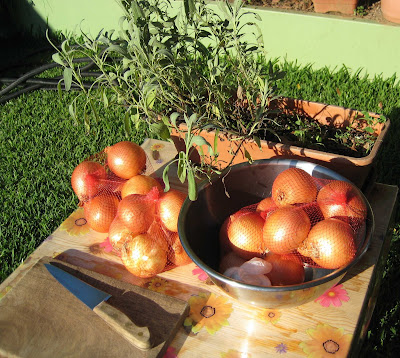 After slicing and dicing, I weighed both the sliced onions and the peel - because I am that sort of a guy. The sliced onion came in at 2.4kg, and the skins at 0.7kg. This is still more onion than the recipe calls for, but J and me like this stuff, so there is no point in under-catering with the onion. 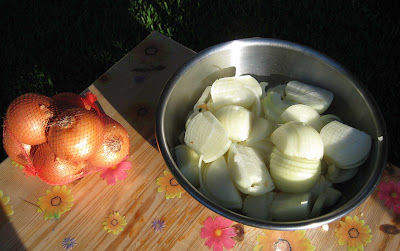 After taking the above photo, I took the onions inside to weigh them. Once I had weighed them, I took them straight back outside - the vapour from this lot was so powerful, my eyes immediarely started watering. I only took them back in when the oil in the pot was hot enough to tip them straight in and then put on the lid.

Here is a selection of onion jam recipes from Donna Hay. I have made 3 of these - all are very good. 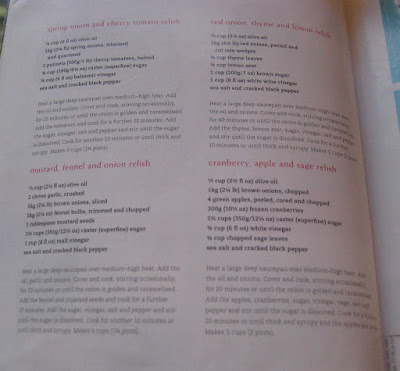 Half a cup of olive oil added and allowed to heat up.

Onions added and lid replaced. Notice at this point how much room the onions take up. This looks like a huge amount, but onions are all water. This will cook down to about 1/4 of what you see now. 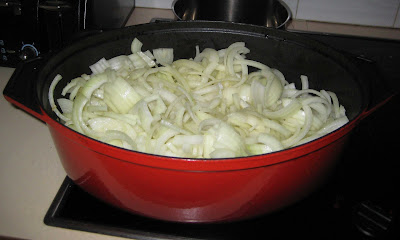 Once the lid goes on, I set the kitchen timer for 10 minutes and go busy myself somewhere else.

Every 10 minutes, I take the lid off and give them a stir. At each 10 minute mark, more and more onions have gone deliciously brown. After 30 minutes, I start stirring every 5 minutes.

This is not for the faint-hearted. I know that you want to go back much more regularly than that and give them a stir, worried that they will stick to the bottom and burn. Do not despair - with this many onions, a huge amount of water is given off, and that prevents most of them burning. A few will still stick and burn, but nowhere near the amount you are worried about. If you only cook say 1kg of onions, sticking and burning will be an issue. The more you chuck in, the less you have to stir.

Besides, you want as many as possibly to go a rich, dark brown colour. You will not get the desired flavour if the bloody things don't cook properly. Don't fiddle with the damned things - just let them cook. Find something else to occupy your time. Resist the urge to lift the lid and stir things around! Let them go brown. A nice, dark brown. Pale onions are useless - you have to risk a bit of burning to get the right colour.

The basic recipe is as follows:

You cook the onions in the oil for 40 minutes over medium/high heat. When they are nice and brown, you throw in the sugar, vinegar, salt and pepper and cook for another 10 minutes, or until it reaches your desired thickness.

My favourite variations are:
What I have done tonight is to take half of the onion out of the pot and set it aside with a pile of chopped baby tomatoes. With the remaining half in the pot, I have thrown in one chopped apple, a big handful of chopped sage and the remains of a bag of dried cranberries. Into that has gone cider vinegar and castor sugar.

In five minutes time, after that has cooked some more, I will put that in some takeaway containers and then put the other half back in the pot, whereupon I will cook the onion some more with about half a kilo of the punnet tomatoes, brown sugar and vinegar.

Don't forget to add salt. And pepper, if you like it.

Apart from being just utterly fantastic with almost any form of cooked meat, you can also make great little pasty rollup things where you mix the onion jam with goats cheese and bake them as scrolls. I'll let J do that recipe one day.

I've also made a pizza base and then smeared onion jam on top and quickly baked it in the oven - that makes a magnificent nibbly.

So there you have it - another recipe for manly men who like meat (with something tasty).

You should have a lok at Steve Graham's cookbook; "Eat What You Want and Die Like a Man".