Some years ago, I read the most fantastic food review in the Spectator (story not available) about how the author of the article bought a dozen different types of bacon from various suppliers, weighed them, cooked them and weighed them again to see how much actual bacon was left after all the water had evaporated from the bacon in the cooking process.

I wish that article was on line. It was quite instructive. It was also quaintly scientific, in that she took measurements, published her methodology, data and calculations and ensured that the experiment was repeatable by anyone else that cared to try it.

I decided to try something similar today during a shopping expedition in a fairly up market shop. I bought a packet of this Boks Bacon, which worked out at just under $40 per kilo. That makes it more than twice as expensive as the stuff I normally get at the supermarket - maybe even three times more.

I have to cook it and weigh it tomorrow morning, because Junior gets home tomorrow night, and if this stuff is as good as its price, he'll want to eat it in future. So I have to eat it in his absence - otherwise, we will be broke. 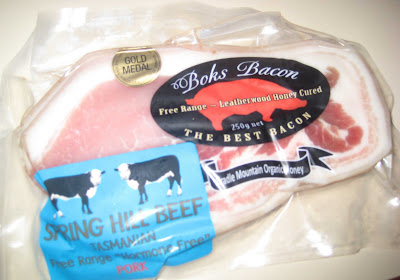 The photo doesn't do it justice - it is a lovely dark red/brown, redolent of proscuitto. There seems to be some marbelling of the meat, not just a slab of fat around the edge. It is not the wishy-washy pale pink stuff that we have become so used to. It is closer to steak in colour than a barbie doll. Best of all, it looks like it will go crispy at the slightest hint of warmth, which is how I love my bacon. Some good quality toast, two eggs lightly poached in vinegar, crispy bacon and some spicy Five Cup Relish (a tomato based relish) from Griffith.

What more could a man want for breakfast?
Badly proofread by Boy on a bike at Tuesday, April 21, 2009