Leichhardt hosts one of the less notorious housing commission developments in Sydney - an area called Orange Grove. As is typical of these developments, there are no orange trees. There are no groves for that matter - except perhaps groves of weeds. The only orange thing in the entire area is this orange mechanical contraption, which will presumably be used shortly to demolish some of the apartment blocks. As you can see here, several blocks have been boarded up and fenced off, and although I don't have a clue as to what is planned, I hope they will be running bulldozers through the area until there is nothing left. 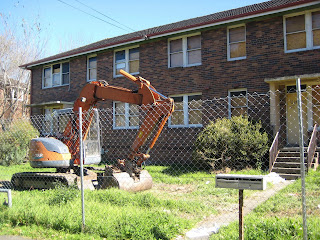 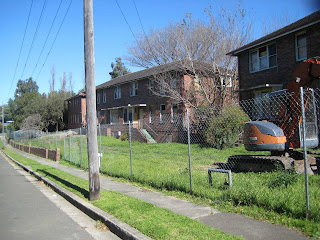 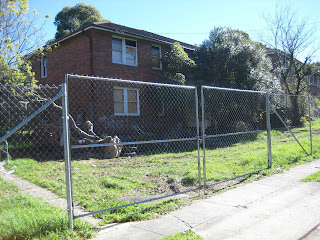 The Orange Grove "estate" consists of several parallel streets of apartment blocks like these, and only about 1/3 of them seem to be slated for demolition or redevelopment. The rest are still occupied. As far as I can tell, the occupants all wear tracksuit pants of some description, don't own a pair of leather, lace-up shoes, smoke, think a rats tail is the perfect adornment for a 4 year old child and prefer to spend their days slop-slopping around in ugg boots. 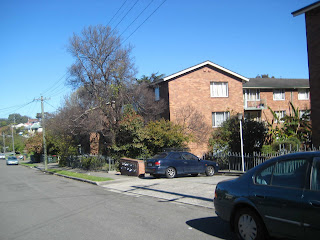 The hilarious thing about this development (sorry, grove) is the limited amount of parking. I guess when the place was designed in the 1960's, being poor meant not owning a car. It probably also meant not owning a TV, and being lucky to own a small, 3rd hand fridge. Furniture would have been pretty sparse as well, and might have been provided by a charity. Eating out would have been having a serve of fish and chips once a month as a treat. Or an icecream. 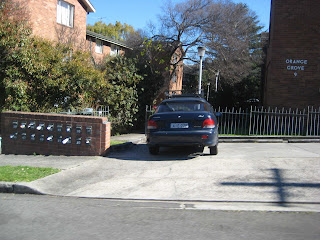 Now of course the place is overrun with late model cars, and I presume being poor means having an XBox rather than an Xbox 360, and having to put up with a flat screen TV of less than 100cm across.
Badly proofread by Boy on a bike at Saturday, August 16, 2008

My 'Cicada' mate grew up in one identical to these.

The difference being that when your mate grew up in one of these, the expectation was that you would move out, get a job and move up in the world. Being poor was a temporary condition, brought about by adverse circumstances of some sort that could be overcome by a bit of gumption. The state was there to help you up, not provide you with the lifetime equivalent of a workfree iron lung.

I am not surprised that your mate has gone from housing commission to a better and more interesting station in life, for the social attitudes of the time did not encourage people to sponge off the state for generation after generation.

He would probably be saddest of all to see that the current inhabitants don't see this as a temporary abode, but as a permanent establishment for them and their children and grandchildren.

Hmm, above posted 'anonymous' before I could sign it - it's from me.