Can't give them away

Spotted this in a back alley today - what appears to be a TV in perfect working order, put out on the kerb for anyone who wants it. 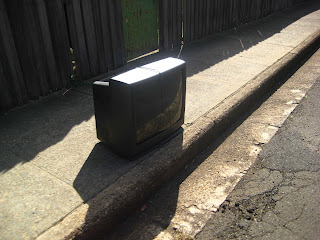 We were in a similar situation last year - we had a TV about this size, and I had gotten sick of tripping over it every time I walked into the garage.

We tried giving it to a friend's daughter, who was at Uni, but it turned out she had a better TV than we did.

We tried numerous other friends, thinking they might want a second or third TV, but all turned their nose up at it.

We eventually handed it over to St Vincents, and I reckon it is still sitting in their shop - even the "poor" would be insulted at the thought of watching a TV with a cathode ray tube in it.

How many cubic miles of landfill are going to be gobbled up over the next few years as everyone dumps their old CRT TV's? It used to be that you could offload your old TV to a 2nd hand shop or a poor relation, but who wants to do that these days when you can buy a small flat screen job for the cost of a few slabs of beer?
Badly proofread by bikeonaboy at Wednesday, August 13, 2008