The Daily Telegraph has kindly drawn to my attention the fact that kiddies at Balmain Public School are freezing their nads off because the outdated electrical system at the school can support heaters or computers, but not both.

That's an interesting choice. I give you heating, or I give you death by computer-induced pneumonia. Way to go, Julia. You really thought that one through.

Personally, I reckon the problem could be overcome by installing large human-driven power generating systems, like the wheel that Conan pushed as a kid in Conan the Barbarian. Pushing that wheel was the reason why Conan grew up big and strong. The kiddies in the photo in the Tele all look a bit aenemic, so a bit of exercise pushing a big wheel around to produce power for the computers would have the advantages of keeping them warm and encouraging them to grow up to look like this: 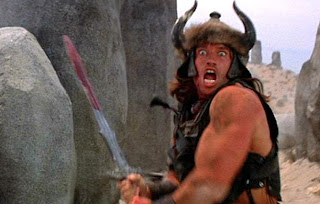 I guess the alternative is obesity. You don't hear about fat kids complaining about being cold much. Then again, if I was faced with the choice of running into a present day skinny Balmain junkie off his nut on crystal meth, or a future Balmain junkie (like the above) off his nut on crystal meth, I think I'd prefer that we stuffed the kids full of hot chips with mayonaise on top in order to keep them warm.

Heat would have been a complete luxury at the rather austere boarding school that I attended. We were allowed to undo our top buttons and loosen our ties when the temperature hit 40 degrees in the classrooms, and we kept warm in winter by playing an awful lot of sport. We didn't have time to get cold.

We even had to put up with cold showers, unless we were in year 11 or 12. The way our boarding house operated was that the bell to get out of bed went off at 7am. At that point, there was a run for the showers. We had two lots of showers - one at each end of the boarding house, and the showers consisted of a single open room with 5 shower heads dotted around the walls. One stood around in a "waiting area" just outside the showers, wrapped in a towel, waiting for your turn for a shower. As there were about 70 kids in our boarding house, and 10 showers, one could wait a while. Especially since one shower was known as the "power shower" - ie, it usually produced no more than a trickle of water.

The thing is, the boiler was just not big enough for 70 kids to all get a hot shower. It would last about 20 minutes, and that was it. I suspect it was all part of a cunning plan to ensure that we were induced to be showered and dressed and ready for breakfast in record time. The reason the younger kids might end up with a cold shower is that the youngest always went last. They were last in line for breakfast. Last in line for lunch. Last in line for dinner, and last in line for hot showers. The rule was that older kids just pushed in front, and everyone respected it. Some newly arrived year 8's didn't appreciate that rule at the start of the year, but the odd black eye usually sorted them out.

So the younger kids would all be waiting at the doors to the dorms at 6.58am, waiting for the bell to go - kind of like a running of the bulls, but without the bulls - and the doors would fly open at 7am and they would dash for the showers, trying to get in first, or at least be first in line. Some dorms had a rule that you had to wait in bed, so beds nearest the door were always sought after at the start of the year (I think the first to arrive at the start of the school year got to select their bed). The doors were made of thin plywood, and I remember the odd kid being too slow to turn the door handle as they ran for the door, and they would end up smashing partway through the door. We were always having doors repaired.

The downside of a bed near the door was that if a dorm raid took place, you were always the first to cop a pillow in the face or a head covered in shaving cream, or finding yourself lying on the cold lino floor with your now upside down bed sitting on top of you.

The older kids would lazily rise a few minutes later and saunter out to the showers, pushing to the front of the queue. Some might simply walk into the showers and throw a younger kid out, but most had the grace to give you a 10 second warning to wash the soap off before tossing you out.

The kids these days have it soft. Pussies.
Badly proofread by Boy on a bike at Sunday, August 17, 2008

Are the kids in the pic in the telly a bit pasty?
Probably computer nerds.