Angela and her minions were handing out balloons today, so I grabbed one for Monkey. He had just exploded a Westpac balloon, so I was desperate for something to molify him.

"The results" here are of course that she has succesfully managed to inflate a balloon and tie it off without leaks. A big achievement - possibly the most she has achieved in her time as the local MP. 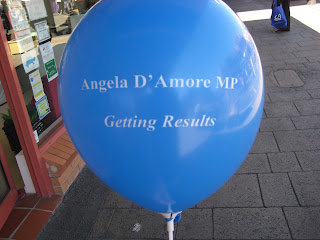 I ran into one of her Labor party fellow travellers a short time later and asked him if he would be getting a similar balloon for his kids.

The answer was a very quiet, "Not fucking likely", for his kids were standing nearby and neither of us likes mouthing off in front of the impressionable ones. He didn't mind saying "fuck" in front of them - he just didn't want to say the words "Angela D'Amore".

He did comment that the balloon was the wrong colour for her - it should have been red. Conservatives like me might not like her that much, but her fellow party members absolutely fucking loathe her. If John Howard were to pay a visit on the same night that she organised a free piss up with strippers, unlimited prawns, beer and a big screen TV showing the footy, most of the Labor party members would be lining up on the other side of the suburb to shake Howard's hand.

I also spotted our Mayor just down the street. He's a Labor man through and through, and he should be sitting in Parliament instead of her. He glanced up the street at Angela's office, saw that she had arrived to press the flesh, so he crossed the road and walked up the other side. There's no love lost there.
Badly proofread by Boy on a bike at Sunday, August 17, 2008

Did you know Geraldine Brooks the writer went to Bethlehem (my era)? 2006 Pulitzer - unfortunately seems to have been mostly for political correctness as she's more of a journalist (who knows how to 'push buttons').

Her first book, probably still her best, was an honest and informative account of lives of Muslim women. They hate her for it of course, typical fanatics.

No, I never knew that. The things you find out!

Geraldine first lived in Alt St Ashfield near the school. Then she moved to Burwood Rd on the Concord side. She was about the 'no.1 ranked' 'babe' of our year and we all had serious crushes on her for her looks and personality. (Especially after we got her to play Miranda in a production of The Tempest, 'Oh brave new world that has such people in it!')

In 1991, as correspondent for the Wall Street Journal (I think) she followed with the fleeing Kurds into the mountains of Iraq, dodging being strafed by Saddam's planes. Her husband had been a critic of Saddam back since the mid 80's Iran/Iraq war and he actually addressed ALP leaders in Australia in support of the 2003 US invasion. I read that Carmen Lawrence, I think it was, spoke up (paraphrase) Yes but my parents were racists during the Vietnam war and this only encourages them (or similar words). Kerry O'Brien often asks this question too, 'Won't Ayaan Hirsi Ali just give support to white racists?' 'Won't intervention in Aboriginal areas just give comfort to white racists?' ad nauseum...

*My wife of 26 years is 'black' (Indo-Caribbean) - we find that racism in Australia is insignificant compared to other countries*.

angela has been good to me. i approached her office for help with getting my daughter a bus pass. she was not long out of a wheelchair and the people who decide who does and doesnt get a pass decided there was no reason why she cannot walk 3.2km to school even though she had major surgery to both feet not long beforehand. everyone angela's office was very good to me and within weeks my daughter had a bus pass thanks to angela and her staff. all the times i have approached her office for help they have never turned me away. the day of ferragosto, i was there helping angela as she was very busy. she didnt ask me to help, i was more than happy to offer and i had a great time. many people wanted showbags and we couldnt fill them quick enough to satisfy demand. if angela is so unpopular, why were people lining up to get showbags? her colleague who did all the swearing should be ashamed of himself. angela is a lady and i doubt very much that she would use such crude, foul and disgusting language in private, let alone out in the street! when angela went to make her speech, there were many people who were disappointed that she was not at her office to speak with them and many came back later when angela had finished her speech as they really wanted to speak with her or just to say hello. i like angela a lot. she is willing to get out there and meet the people, she is willing to help when asked and if she cant help, she gives out numbers of people who can. with the bus pass issue, i asked one of her fellow mp's for help and he told me it wasnt his department. i wasnt impressed at being treated like i was a nuisance by him. angela has my vote any day. she's an angel on earth :)

I would like to quote part of your blog in an article I am doing about Angela D'Amore.

Can you please contact me as soon as possible: c_connelly@hotmail.com, I would love to line up an interview if that is possible too.