Can public transport save the planet?

I seriously fucking doubt it.

Here is the customer carpark at Meadowbank Railway station - this is it. Space for 20 cars, if you are lucky. A double deck 8 car train seats something like 800 passengers, and you can jam 2000 into one if you really want to. 20 car spaces, 2000 spots on a train (if you crush people in). Something does not add up. 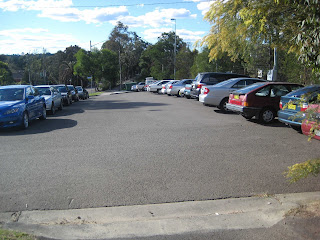 Here we have one of the staff carparks at Concord Hospital. One of the car parks. This car park goes on forever. If you park in the back corner, you almost need to catch a bus to the entrance of the hospital. 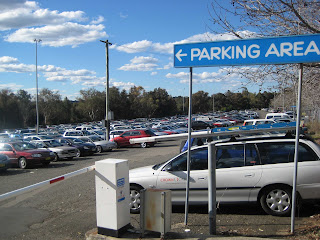 Now this is a public hospital, owned and run by the NSW state government - the same people that own and run that railway station just up the road, the one with the pathetic number of car parking spaces.

You'd think that if the government was banging on about 'saving the planet' and other such malarky, they'd be doing their utmost to encourage people to get to work by any means other than a car. If they really meant what they were saying, then all departments would have understood the message, and would be doing their utmost to get their staff and customers to not drive to their place of employment or where they get served.

If they really meant it, the railway station would have a carpark as big as Concord Hospital, and the hospital would have one the size of the current railway carpark. (Please, don't ever fucking allow that to happen. I do not ever want to catch a train to and from hospital).

Concord Hospital by the way has a large loonie bin wing. Aren't you happy to know that all those mental patients seeking treatment at Concord drove their cars there? That in itself kind of explains half the problems with idiot drivers in Sydney......
Badly proofread by bikeonaboy at Wednesday, August 13, 2008