Today was the biggest day of the year in Five Wog - an annual festival called Ferragosto. I think that it means "day of garlic breath", although it could also be the patron saint of white string singlets. The festival involves closing off about half a kilometre of street and then filling it with 10 types of tacky, tacky stalls. I had the worst hot dog since... since... since a trip to the footy a few years ago. But I also had some good gellato, and found that the shop that makes it is within easy walking distance of home.

A festival like this always brings out the wogs in droves. It's almost as bad as a World Cup soccer match against a country like Brazil or Namibia. Maybe not Namibia. One sign of that is a street full of wacky Fiats. I had no idea that of the tens of thousands of Fiats that we imported during the 1970's that as many as a dozen across the whole country would still be in working order and not rusted into seven or more major bits. 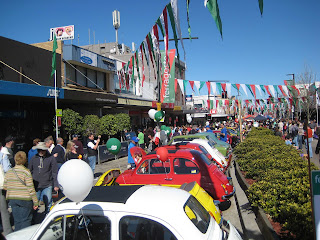 The festival always rams one thing home - how shockingly bad our roads are. This is the one time of the year when pedestrians can walk down the street, and it is not an experience that I would recommend. I'm sure the Ambulance service brought in a few buses to take away the people with rolled ankles from all the pot holes and ditches in the tarmac.

I don't know if these Fiat's made it here under their own steam or not, but I am sure that several roads will be blocked on the way home tonight whilst the owners of broken down Fiat's await a tow truck.

Apparently a new statue was unveiled on Friday to commemorate Ferragosto. I saw it when it was still under wraps - the tarp was at least 20 or 30 feet high.

I am not sure why we need a garlic statue that big around here.
Badly proofread by Boy on a bike at Sunday, August 17, 2008