I was reading this fascinating story over at Flight Level 390 about a brake failure when it reminded me of a beast I used to own - a Rover 3500 like the one shown below. 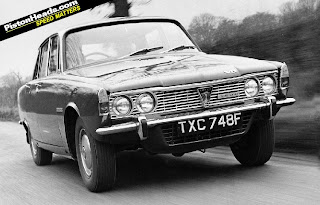 How did I make the connection?

Fi-fi (the plane) had a broken skid sensor wire in the brake system. Fi-fi is some sort of new-fangled Airbus, the model of which I am always forgetting, but it was the bit about the sensor that triggered a memory.

This Rover, from 1969 (or thereabouts) had a brake pad wear sensor for the front pads. It was a very simple arrangement - the pad had a wire embedded in it so that when the pad wore down to that point, it made contact with the brake disk, completed a circuit and triggered a warning light on the dash. From memory, it was the same light as the handbrake - if you disengaged the handbrake and the light stayed red, it was time to replace the pads.

Those old Rovers also had a really simple method of telling you when an indicator bulb had blown - the indicators would fail to "blink" on that side on the dashboard. If you indicated to go left and the little green arrow light came on and stayed on, it meant either the forward or rear bulb had blown. I guess it just took a bit of forward thinking in the design of the electrical wiring to make that work.

I don't know why they had the brake wear sensor - perhaps pads wore faster in those days (although since they were probably full of asbestos, they might have lasted longer than a modern set). Maybe pads weren't checked at the regular service, or so many people did their servicing themselves at home that they generally forgot to check the pads.... who knows. But I thought it was a great bit of engineering, and an interesting safety feature.

Given the number of cars that I see driving around these days with no working tail lights, you'd think some sort of blown globe warning system would be engineered into every car on the road. If they could do it in 1969, I'm sure it could be done today.

My only stipulation would be that they didn't use a British wiring harness. I never drove my old Rovers anywhere without a can of WD-40 handy. Or two. I used it a lot.
Badly proofread by Boy on a bike at Thursday, August 21, 2008