These two photos were taken at Rhodes, where a fancy series of apartment complexes are being built along the water. The site is horribly contaminated with all sorts of nasty industrial wastes, so there is a processing plant going full tilt there in an attempt to clean the place up. 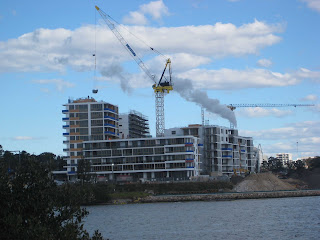 The plant is visible for miles around as it gives off a column of steam.

I made the mistake of riding under it last week, and I can tell you, it ain't distilled water. A few drops of something landed on me as I went under the cloud of "steam", and whilst they didn't burn a hole straight through my lycra clothing and then through my arms and out the other side, it did have a certain reek to it.

I have been trying to work out what the smell is all week, but I can't place it. I have smelt it before, but I can't figure out where or when. It's not an "off" odour like rotting sheep or dams of liquid pigshit, and it's not a "clean" chemical smell like household cleaners. It's kind of oily and nasty - something that really catches on the back of the throat. Maybe it's what an oil refinery smells like - I might have to ride down to Botany to see if I can smell something like it there. 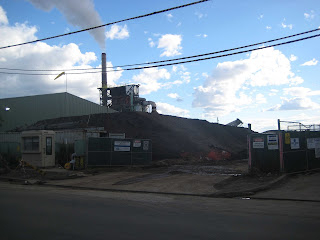 Hang on, no I won't. I have got no fucking interest whatsoever in riding through a haze of chemical crap.

I don't know how the residents put up with it - people live just across the road from this. I'd be in MOPP 4 gear if I was them.

Look out for stories in a few years time about three headed puppies and the like.
Badly proofread by bikeonaboy at Thursday, August 14, 2008