Although the SMH thinks so, this is not an APC - not with that enormous cannon poking out of the top. 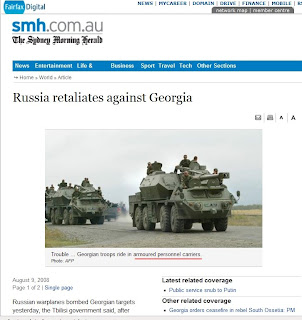 It is not designed to carry infantry into combat, which is really the whole idea of an armoured personnel carrier. This is an armoured bit of artillery.

Update - I'm not the only one on the interweb asking that question. Turns out that it is a Czech built howitzer.

This clip gives the average numbskull a good idea that they are a big shooty cannon thing, not a carry people around thing (apologies to the Disident Frogman).

Frankly, if you can't tell the difference between the two, then you really shouldn't be reporting on the topic at hand.

It took me less than 10 minutes and a bit of Google bashing to get the answer.
Badly proofread by Boy on a bike at Saturday, August 09, 2008