Weights and prices for a soldier's care pack

Things I was able to get at my local supermarket: 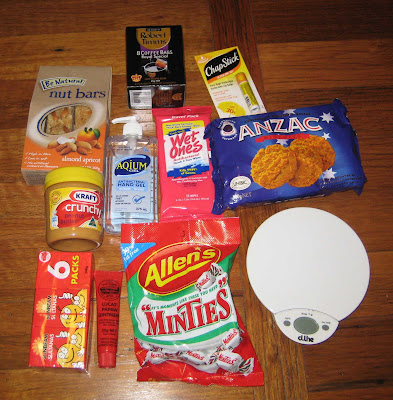 By the time I add some magazines, and buy a few bags of replacement Twisties, this will be over the 2kg limit, so I will spread this over 2 boxes. Magazines tend to be the most expensive item, so I try to limit them to stuff that we buy normally, read and then throw out. Some magazines are quite topical, and have a short shelf life, whilst others can be read a year later and still contain some value (think of the stuff you find in Doctor's waiting rooms).

I have no qualms about sending a pre-loved magazine that has a good shelf life, since 500 troops might end up passing it around if it is any good. It will be pretty worn by the time it gets to the end of the regiment. I don't think the first digger will complain much if it has my grubby fingerprints on it, and a few folded corners.

This is where the digital scales come in handy. A 375gm jar of peanut butter actually weighs 411gms. 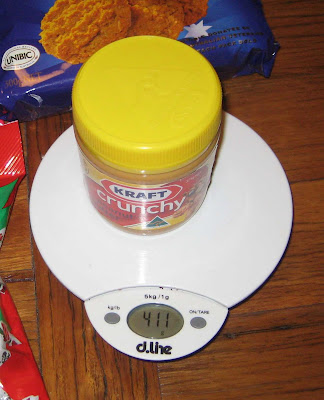 This handcream comes in a 375ml bottle, which tells us nothing about the weight. It actually weighs 372gms. 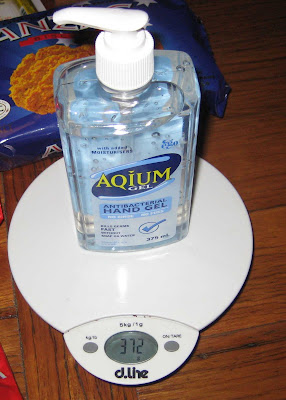 The actual weights (vs advertised net weight) of all items are as follows:
The actual weight of this lot comes to 2078gms, as opposed to an advertised weight of 1814gm. I guess that if you don't have a set of digital scales at home, the only way to do this in the supermarket is to add up the advertised weights on the packaging and add 15% for safety. Otherwise, you might find yourself having to open the box in the supermarket to take something out.

Magazines are surprisingly heavy. I weighed the 2009 Laura Ashley catalogue as a guide (don't ask) and found that it came to 815gms. Two copies of The Spectator, which are quite thin and light, came to 230gms in total. Magazines like Ralph and so on tend to be more at the Laura Ashley end of the spectrum. You can burn your allowance very quickly with reading material, so it has to be worth sending.

Now all I have to do is get organised enough to get this lot to the post office before the kids get into it (again).
Badly proofread by Boy on a bike at Monday, May 18, 2009

This is a worthwhile scheme and needs support. The benefit provided to the diggers receiving these parcels is out of all proportion to the small investment of time and money involved.
It makes a helluva difference.....