I followed this pair of..... interesting people for a few minutes. They are riding "fixies", which is a fad sweeping some parts of the cycling world. They do nothing for me. The only way to brake is.... read the linked article. I'd love to try one at a track, but I think only loonies ride them on the road. I've had enough prangs as it is with a bike with proper brakes and a non-fixed gear. I have no desire to have any more on a bike that is a throwback to the 19th century. The bloke on the right kept locking up and skidding whenever he braked. I doubt his rear tyre will last that long. The bloke on the left was seriously about nine feet tall. I barely came up to his bum crack. 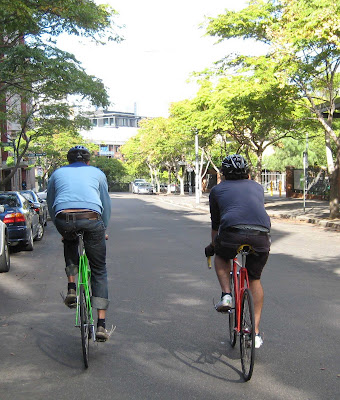 Then we have the King St cycle path. Or perhaps the nearly completed cycle path. I wasn't sure if it was supposed to be in use or not. That dirty great concrete barrier suggests no, but it could also be there to stop idiot drivers from thinking that it is a lane for cars. 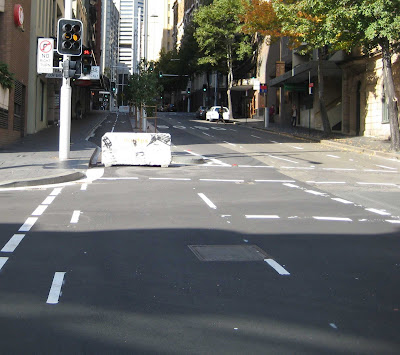 The new push button for bikes on the lamp post suggested that it was right to go. 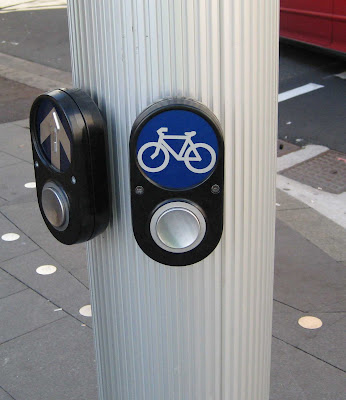 So I gave it a go. I managed to squeeze around the concrete barrier at the bottom of the hill with no problems, but it was too tight for me at the top to get out. I had to dismount and walk the bike between the kerb and the barrier. What the bloody hell could be holding this thing up? 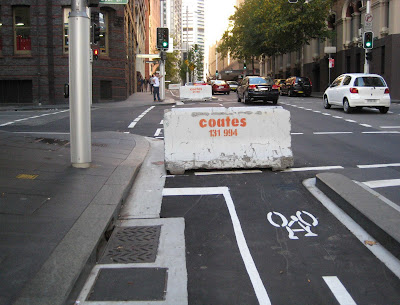 This is a photo of the steps that lead down from the cycle path on the Harbour Bridge - that was mentioned in the SMH last week as one of the 10 worst cycle problems in Sydney. Having gone up and down these steps almost every day for a year, they don't faze me. I don't see them as a problem. They're part of the heritage of the bridge. Sure, you can get a bit of a traffic jam here at peak hour when a dozen or more bikes queue up to get around this barrier and then down the stairs, but commuting by car is also replete with lots of annoying stops. Why should cycling be any different? I'm more interested in safe. This is reasonably safe. If the government is going to toss money at cycling, I'd prefer it to be spent on routes that improve safety, not on things that save you 30 seconds. 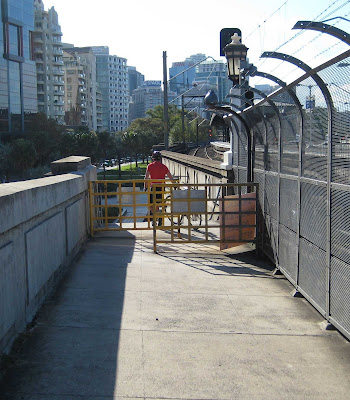 Here's the view down the 55 stairs. The more adventurous "temporary Australians" amongst the cycling community don't bother with dismounting and walking their bike down the stairs - they simply fly down the ramp under full brakes. I wouldn't mind doing that myself, but the exit at the bottom involves shooting out into traffic coming from under the bridge to the right. Like I said - temporary Australians. 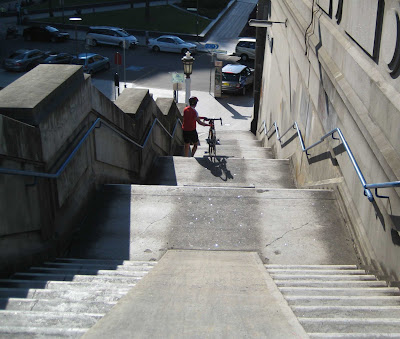 Boab, has anyone managed to ride their bike up the ramp? Can't see anyone doing it on a fixy.

I have never seen anyone attempt to go up the ramp - it is wickedly steep. When I go down it, I have to keep one hand on the brake to keep the bike from tearing away.