Staying out of the way

For all intents and purposes, bikes and cars might as well exist in parallel universes.  When I drive, I take the most direct route using main roads.  When I ride, I try to avoid main roads like the plague, preferring wide, quiet backstreets and routes that skirt nasty hills.
The photo below shows a main-ish road around here, but it is tremendously wide, and easily supports a bike lane up the side.  It can get quite a lot of traffic on it, but that traffic is rarely a problem because there is room for us and them to co-exist without getting in each other's hair - or more importantly, without me getting in their bumpers. 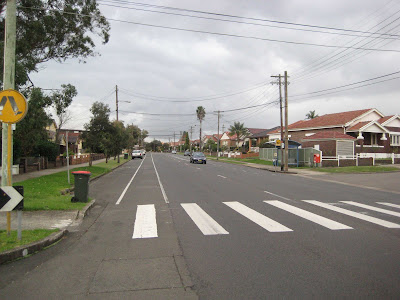 This is another quiet street, this time paralleling Victoria Road, which is one of Sydney's busiest roads - 3 or 4 lanes of snarling traffic in each direction.  I much prefer a quiet, tree lined street like this, and firmly believe that any cyclist using Victoria Road is mental and should be locked up immediately.  The road here is narrower, but the traffic is so light, it doesn't matter - if a car needs extra room to go around me (even if I am in the bike lane), they can cross the broken line without worrying about oncoming traffic - because there is hardly ever any of that.  When I ride this street, I occasionally hear the traffic roaring past one block to the side - but otherwise, it's just me and my breathing as I do the hills. 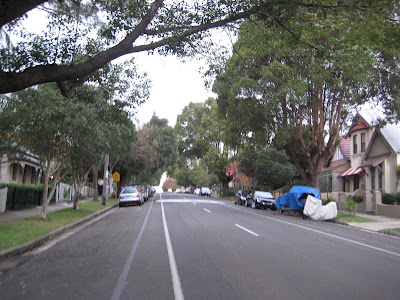 Here's a Google map of the area between Drummoyne (on the right) and Five Wog (on the left). Victoria Road is the yellow road on the far right going north-south, and Lyons Rd (another main aretery around here) branches off that and runs east-west through the middle of the map. 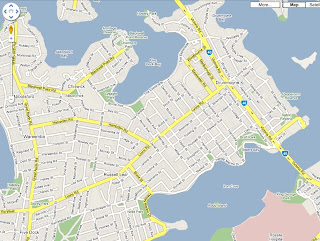 Here is my life vs death interpretation of the map.  The roads marked in red are shockers if you are on a bike.  Lyons Rd is so rough, the surface is like the Giant's Causeway - it's bad enough driving along it in a 4WD built for shocking outback tracks.  On a bike, it is worse.  The road itself is narrow, with no room on the left for a bike lane.  Cars barrel along it well over the speed limit, and they take no prisoners on this stretch.  It's fine once it crosses Great North Rd in the bottom left - at that point, it becomes one lane, and there is room for bikes.  I never, ever ride on Lyons Road.  Not even at 7am on Sunday when just the grannies are going to church. 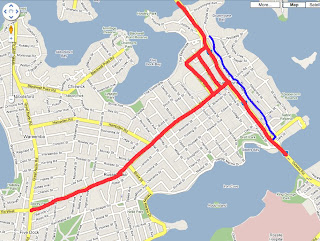 The blue line on the right is the quiet street in the photo above.  It still gets me where I am going, but without the hassle of mixing it up with angry, impatient drivers.  Yes, it adds a minute or two to my journey, but riding a bike is not just about getting to your destination - the journey there is half the fun.  Once I step into a car, I become quite mono-maniacal about getting where I am going, and I will happily run down grannies if they get in my way.  I stop for no one and nothing.  But the bike produces a different mindset - it's going to take longer to get there than by car, so you might as well accept that and enjoy the experience.
I see a lot of bikes on the back streets, which makes me think that drivers that never ride seriously underestimate how many cyclists are out there.  Just because they don't see them on the freeway that they are taking to work, doesn't mean they don't exist.  The bikes may be pottering along underneath the freeway (if it is raised), out of sight and out of mind.

Driving an MX5 is a bit like that - it feels every bump and undulation (in a good way) so you take into account road surface when planning a journey.
In addition, lots of drivers (who probably don't see bikes at all) also disregard a vehicle that's hip-high.
Driving one of these things concentrates the mind - but unlike a bike, doesn't do much for the body.