Where did the proper hot dog go?

I used to enjoy a day out at the footy. I wouldn't say I am in to any code in particular (except soccer, which is for fruits), but I don't mind watching a couple of hours of a ball being thrown or kicked this way and that with a beer in hand.

I spent a decade or so living within walking distance of the SCG. It was a bit of a hike, but nothing to write home about - maybe half an hour on the hoof from door to turnstile. One of my favourite things was getting a proper hot dog outside the ground from one of the itinerant BBQ pushers. They cooked real sausages, served them in between bits of tasty bread and they always cooked their onions properly. I don't remember ever paying more than $2 for a hot dog.

Then the trustees of the SCG got all uppity and had them removed. After that, I went to a few games safe in the knowledge that I could still get a good hot dog outside the pub across the road after the game. But even that bloke was disappeared by a black helicopter, so I gave up. He might be back for all I know, but I couldn't be bothered going back for a look. A good sporting contest should involve real sport, real beer and real food. We still seem to have the first, the second is a distant memory and the third is gone and completely forgotten. Except by me.

This is what I got for $5.50 at the Roseville Racecourse today: 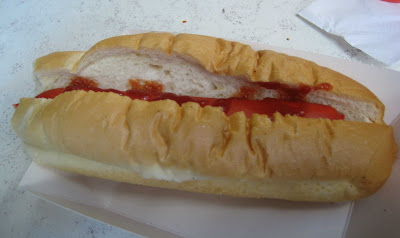 It was even worse than it looks. This is billed as a "gourmet hot dog".

I think things went downhill when the Swans started playing Collingwood at the SCG - the Collingwood fans must have demanded food that they could eat without teeth.
Badly proofread by Boy on a bike at Sunday, May 17, 2009

That one's a disgrace, BOAB. I know Americans are horrified if ever faced with an Australian hotdog, and I don't blame them cos I don't like them either. It's a mystery to me how the manufacturers get away with selling them.