One down, one to go

One box packed and sent to Afghanistan, the 2nd awaiting a few more goodies to flesh it out. As usual, the postie tried to charge me $7 to send it, until I pointed out that it was going to an AFPO (Armed Forces Post Office?) - at that point, she got incredibly embarassed and put it through with alacrity. 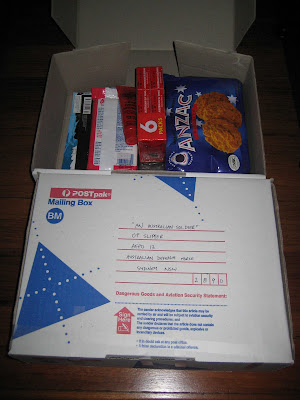 It was only after I had packed and sealed the box that I realised that I'd forgotten to stick a letter in with the goodies. I was going to ask for feedback from the recipient, requesting info on what the troops are short of. Duh. I'll stick one in the second box.

I went on a short hunt tonight for Australiana to stick in the box - flag pins and that sort of thing. It's amazing how hard it is to find that sort of stuff when you actually want some of it. I couldn't find a single appropriate thing anywhere. I have this horrible feeling that I'll have to visit some of the tourist shops at Darling Harbour in order to track some down.
Badly proofread by Boy on a bike at Wednesday, May 20, 2009