Whatever happened to summer? We had a few scorching days, and then it's been back to cool and balmy weather. Or cool and windy weather. Regardless of what's going on in the sky, bloody cyclists seem to be multiplying like rabbits. I now have to fight with cars, trucks, taxis and now bikes for some road space. 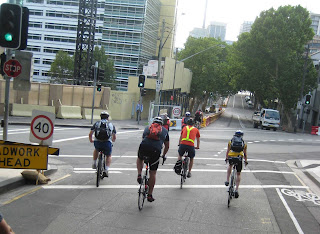 A nice thing about my route into work is that I don't have to think too hard about anything - I see half a dozen cars most days, and all I have to do is turn the pedals and I'll get to where I'm going. But those days are coming to an end - I now have to wake up and keep my eyes and ears open for the growing hordes of bikes. Spending a pleasant half hour zoned out is no longer an option. 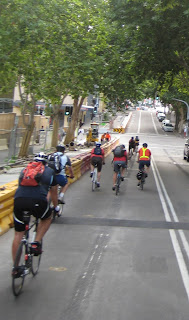 A hipster on a fixie - and a white one at that. White frame, white wheels, white everything. No brakes either. These guys are nuts.

This is where they seem to end up:

On another serious note we have been noticing an increase in cyclist injuries.
We have had at least three trauma cases in emergency this week as a result of cyclists being hit, all of them riding on our roads at night.
More people are riding on the streets at the same time more cars use them.
People also forget at night it is more difficult for motorists to see pedestrians and cyclists, especially if they are wearing dark clothing.
We have seen people who are still wearing dark clothes at night, without reflective gear and some who are not wearing a helmet.
In one case a cyclist was thrown off his bike and he suffered serious head injuries because he wasn't wearing a helmet.
Another rider had a tiny red light, which looked like a Christmas decoration, on his backpack.
These people will then end up with life-threatening injuries such as a shattered spleen, internal damage to their kidneys, multiple fractures to their legs and arms, internal bleeding and in some cases head trauma.
They need to remember the basic rule - have lights on their bikes so that motorists can see them. They should also be wearing those fluorescent singlets, which are cheap and sold everywhere.
If you get hit even at 40km, you will end up with significant trauma just like these people did.
Cyclists riding at night are invisible, especially on multi-lane roads.
By taking a few simple precautions, like not wearing black but wearing something that stands out at night, then you reduce your chances of being hit and ending up in emergency.

He has a front brake, if you look closely. He'd already have died if not. ha.