Last two idiots of the day

Just two more idiots to go - hopefully, this will be my idiot quota for the year all used up.
2nd last idiot was driving the white truck on the left. He was trying to turn right out of a side street, and couldn't due to all the traffic coming from up ahead. But for some reason, he decided to stick his head out his window and abuse me as I rode past! I didn't catch what he said - it was garbled - but he was definitely having a go at me. As if I was the cause of his problems! 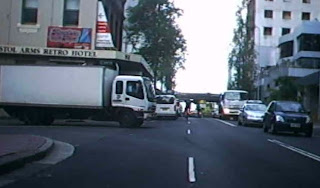 Last idiot of the day was driving this cab. I was turning right, and was indicating to do so, and he took offense at that. As he went past, he let fly with some abuse as well. Unfortunately, I turned just as he went by, so I didn't get his plate on camera. I really should have chased him and had a word. He didn't leave much room as he went past - another inch or two to the right, and I would have been cleaning the dirt off his panels with my knicks. 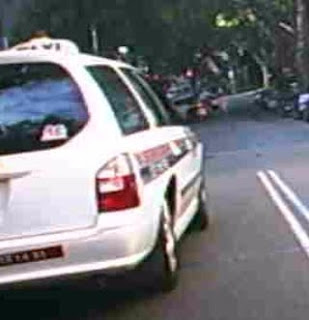 Maybe there is a full moon out at the moment - the loons are certainly out in force!
Badly proofread by Boy on a bike at Tuesday, December 15, 2009

I was wondering if you have an opinion on ‘man of lettuce’ latest post on Cycle warriors.

Are there duel use crossings for pedestrians and cyclists?