I start with an arty photo of three bikes that I had to give way to as I emerged from a side street. The original video still was so awful, you could hardly pick out the first two cyclists in it, so I fiddled with a number of treatments before settling on a "pencil sketch" effect. I have found that if the video camera is seeing too much sky, it washes out the rest of the view. It can't handle too much light very well. I need to tilt it down to view more road. Asphalt - that's what we want to see. 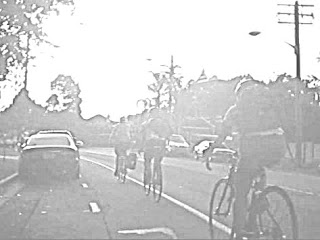 The council has been putting Rangers on the Pyrmont Bridge most mornings to catch speeding cyclists. How a Ranger on foot is supposed to catch a mad speeding cyclist is something that escapes me. If I don't want to stop and get a ticket, I can just put my foot down and be off at 40km/h before the Ranger has time to say "boo". I haven't seen them writing any tickets, but the hell-for-leather crowd that tear through the slow moving, addle-brained pedestrians like sharks through puffer fish appear to have calmed down and learned to take it easy. 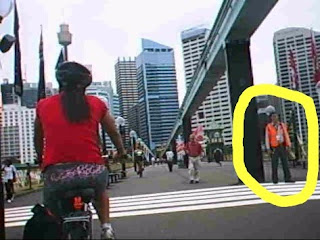 At first glance, you might think this is a woman. Long hair, petite etc etc. But when I got behind this cyclist, I had second thoughts. Although they were petite, they were very muscley, and the facial features that I could see looked rather masculine. I thought it might have been an Asian bloke that was quite feminine. 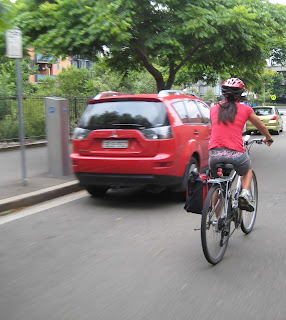 Then I got to the lights and spotted the bra strap. Gotta be a woman. I think. 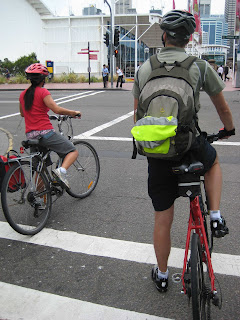 The bloke on the right is being all Captain Sensible by sticking a bright, fluro jacket in the back pocket of his back pack - that was nice and visible from several hundred yards away.
Badly proofread by Boy on a bike at Tuesday, December 08, 2009

Finally a pitcher of a woman on a bike.

Regarding the light problem - get an old pair of polaroid sunglasses and tape it over the camera lens.

It will also protect the lens from bug smash goo.

Looks like a Sheila to me Bruce. I am with Anon, more Shelia’s and less men’s arses and calves.