Fiddling the numbers the CRU way

I thought I would have some fun this week by fiddling with a set of statistics to show how graphs can be manipulated to say anything you want. I spent a few minutes considering what sort of data set to use, and I settled on the ages of our Federal MPs - you can look up their dates of birth at the Australian Parliament House website.
The first graph shows the number of MPs born in each year. They range from 1935 to 1981. I then fitted a lovely, smoothed curve to it, which resembles a bell curve. 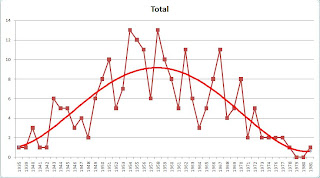 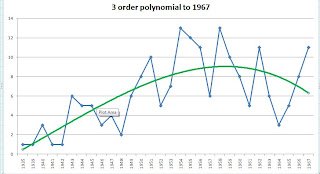 So I changed to a 4 order polynomial - and look! The signs of a hockey stick start to appear! 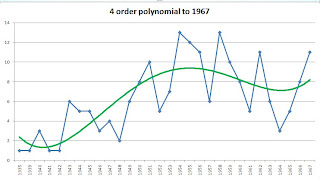 So I cranked it right up to a 6 order polynomial and - wooowor! - the hockey stick just takes off! 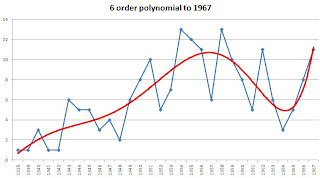 I then discovered that Excel 2007 has this nifty "prediction" button when producing graphs like this, so I asked it to add a prediction for 10 years into the future. 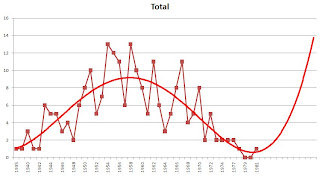 Taking this to a Tim Flannery type extreme, I asked it to predict out to 100 years. According to my scientific survey, in 2109, there will be 800,000 Federal MP's who were born in 2067. The weight of those MPs alone will cause Canberra to sink, and the entire city to be drowned under Lake Burley Griffin. Oops, I mean water levels will rise, leading to the catastrophic destruction of Canberra. We could stop that happening by opening the weir downstream and letting some water out, but in typical fashion, Labor and the Greens would insist on taxing something in order to stop this - like neck ties. 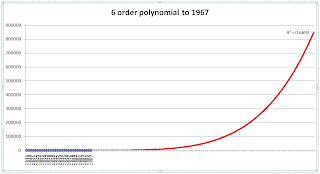 Senator Pwong. Always looks haggard when I see her in the paper. She dresses like a state school teacher. Again, must be 49 at least (actual age 41).

So I went back to my spreadsheet and entered my "estimated" values for the ages of those born in 1968 or after - and look at this - suddenly even a flat trend line is taking off. Because my estimates were completely crap, it boosted the numbers of those apparently born in the 1960s. However, I will defend to the death my "scientific" method for estimating their ages, and if you try and FOI my data, I'll just delete it. And you have no right to my data, even though the taxpayer paid to generate it, because it's mine. Mine, mine, mine. So there. 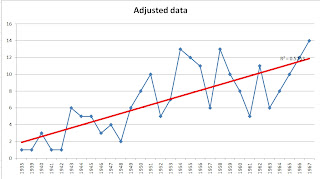 There is another way to estimate the ages of our MPs, and that is by using the infill method beloved of climate forgers. If you have temperature records from one weather station, but the one next door is on the blink, then you fit the records of the working station to those of the dud one and "complete" your data set that way.
So let's imagine that we didn't have Pwong's age. We could infill it by taking the age of the Senator that she sits next to and then "adjusting" it using some sort of fudge factor. As I couldn't find a photo of Pwong sitting in the Senate, I have substituted one of her with Australia's favourite window licker. 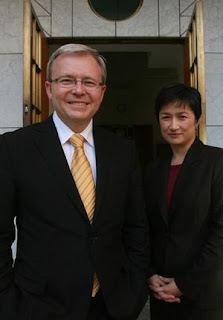 We know the wax muncher was born in 1958. His data of birth is probably the only thing he hasn't lied about, so I will begrudgingly accept it. If we use the method used by the GISS to infill missing data, I'd have to say that Pwong was born in 1960, and use that record in my graph.
Oops. She was of course born in 1968, but what's 8 years between friends?
And thus is data twisted, manipulated and plain made up in order to serve a cause.
Cheers!
Badly proofread by Boy on a bike at Friday, December 04, 2009

Why do you want to produce a hockey stick? There isn't any such behavior in your data.

It also makes little sense to try to fit the data any closer than in your first chart. There is too much inherent variability in the data. This fit actually makes the most physical sense: people born in the earlier years have largely retired or passed on, people born in later years have not yet gotten into politics, so people in the middle have the greatest representation.

The crazy predictions you show are typical of fitting a polynomial, then extrapolating beyond the extent of the data. Polynomial fits are only good for interpolation within a well characterized data range. Poly fits do not help discerning the underlying mechanism behind the data, and they are outrageously bad at forecasting.

Hooray! Tom gets it!