I spotted a touch of trouble on the ANZAC Bridge this morning - traffic was banking up quite badly, and then I spotted the red and blue flashing lights in the distance of a Police car. 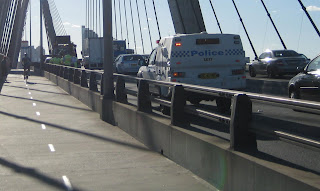 I quickly got close enough to find a gaggle of Police and tow truck drivers attempting to sort things out. 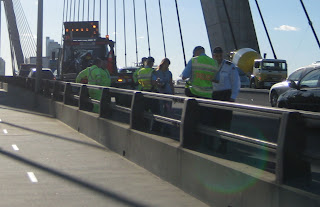 One truck driver was preparing to load this VW and take it away - I couldn't see any damage, although it might have been on the driver's side. 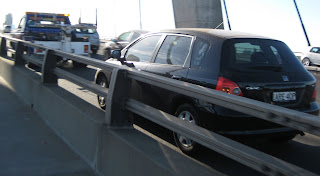 The second tow truck had a motorbike on the back, which also appeared undamaged. Of the rider though, there was no sign. He could have been standing in that earlier gaggle, or he might have been taken away already in an ambulance. I guess we'll never know. But so much for "cyclists holding up the traffic" this morning. 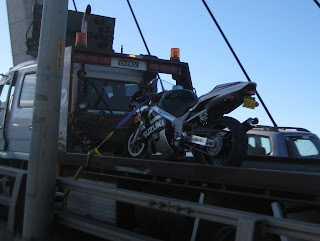 On a lighter note, we have two different approaches to "filtering" in this photo. The two cyclists at the front have filtered past the cars and taken pole position, whilst the lady in front of me stopped where she was in the queue. I decided to stop behind her to take the photo. Normally, I'd stay in my spot in the queue and not filter, and that works out well. However, in this instance, the driver turned out to be a complete crab when the lights went green. They failed to move off and turn left, and because they were so far out from the kerb, we couldn't get around them. Grrrr! Some times it pays to filter! 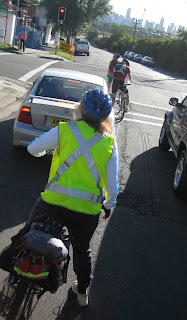 Another casual cyclist in the city heading home, dressed in typical Friday semi-casual office clothes. If the stupid RTA had built the ANZAC Bridge as a much lower and flatter bridge, we'd probably have triple the number of cyclists coming in from the west that we have now. The bridge is fairly steep, and I think it puts a lot of people off - you do get quite sweaty attacking the bridge. If it was flat, you could amble across it and arrive in the city nice and dry and not in need of a cold shower. 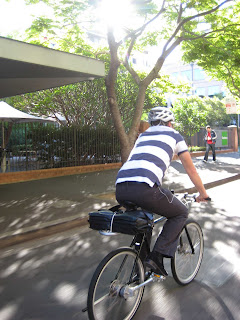