The RTBU - the bus driver's union - decided to hold a 24 hour strike on Friday. The weather gods also decided to make the day wet as well. The combination of the two produced thousands of miserable, grumpy looking people trudging across the ANZAC Bridge into the city from Balmain. Balmain is a Labor-held seat. I wonder what sort of reaction I would have received if I had stood at the city end of the bridge and asked those trudging by in the drizzle if they would be voting Labor at the next election? I thought I had video of them trudging along, 1984 style, except I found when I got into the city that the camera batteries had gone flat and I had missed them all.
I don't give a bugger about the wet most of the time. The only time I get slightly concerned is when the rain turns to hail and the hail mutates into golf balls. Not much fun cycling in those conditions. Otherwise, I prefer riding in the rain to riding into a stiff headwind when it's 42 degrees. Rain is nice. Why should I worry about getting wet when the first thing that I do when I get to work is take a shower? What is the difference between water falling from the sky and water falling from a showerhead? 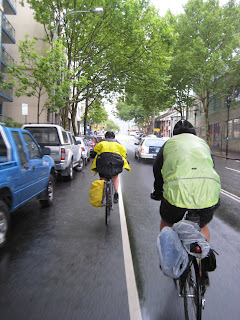 Normally, when it rains, the number of cycle commuters dries up. Many cyclists are fair weather two-wheelers; but on Friday, they had no choice. It was ride or walk. As I was stopped at a red light, the bloke next to me quipped, "The RTBU has done more for getting people to walk to work that a decade's worth of government advertising campaigns". I thought about that on the rest of my ride. Perhaps the best way to get people to walk or cycle to work is actually to get rid of public transport.
I followed this cyclist for a while, mainly because I don't hoon around in the wet. I've skidded and fallen over too many times to want to go down again on wet bitumen. The upshot of following someone without a rear mudguard is that when I got to work, I found that my chest was covered in about 1,000 dots of oil and grease that had been flicked up from their tyre. Nothing like a bit of rain to lift all the oil out of the road surface. 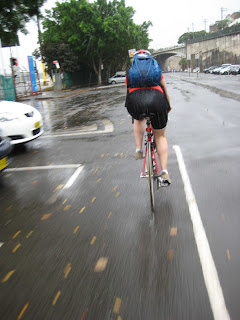 Many of us had to play "duck under the umbrella" as we crossed this bridge. Some people have no idea. 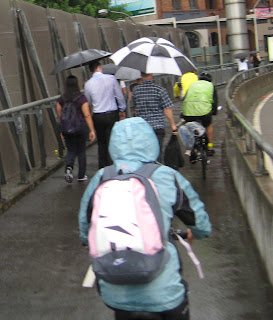 Quite a few cyclists looked like this was the first time they had ever ridden into town - or in the wet. 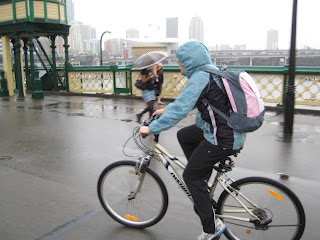 Like I said, there were a lot of bikes around for a wet day. 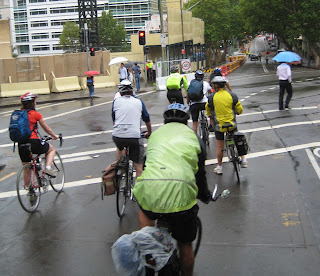 On days like this, I always wrap my work clothes in a plastic shopping bag before putting them into my (supposedly) waterproof pannier. Another useful use for those supposedly despised enviro-killing bags. 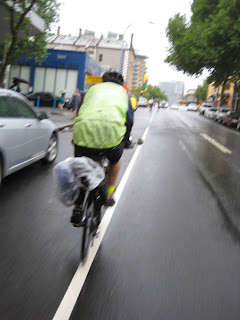