Has the tide gone out on global warming?

Some months ago, Ashfield Council spent a fistful of ratepayer's money on putting up "tide markers" and accompanying signs around a section of the Bay Run. As far as I am aware, I am the only person who has ever stopped and read the signs. I pass them twice a day every working day, and I have never, ever seen anyone stop and even glance at them. The tide markers are supposed to show what a record high tide will look like in 2050, and us grockles are then supposed to be so shocked, we go home and tear out the air conditioner and scrap the clothes dryer.
As if.
What cracks me up is that most of these markers have been put up on what looks like reclaimed land to me. Reclaimed land, because it is not well compacted, tends to sink or subside over time. If these low lying flat bits of waterfront flood in 40 years time, it is going to be partly due to the land sinking rather than the tide rising. Although the other factor in rising water levels might be all the shopping trolleys that the westie bogans upstream keep dumping in the waterways.
I just thought it would be fun to show the tide markers when the tide is right out. 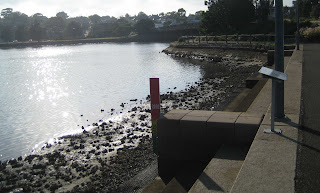 Instead of spending trillions on crippling our economies, if we are worried about these bits flooding, we can simply do what our forefathers did: turn up with a few hundred truckloads of dirt and build up the reclaimed flat bits a few feet. That will be a lot cheaper than forking over fistfuls of cash to the government every year for the rest of our lives. 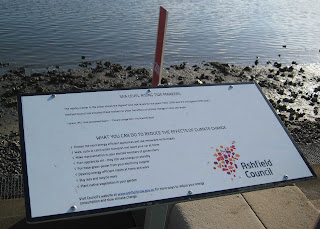 On to things cycling. I really must remember to record a bit of video when I take some of these photos, and describe why on earth I took the photo in the first place. I don't know why I took this, but the juxtaposition of the cyclist against the hand-hewn rock (hacked out by convicts 200 years ago) is pretty groovy. 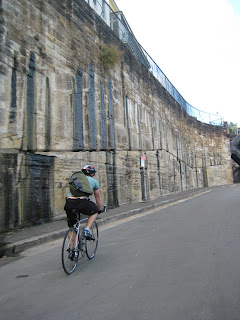 I am vaguely intrigued by thee multi-speed hubs. Personally, they remind me too much of the 3 speed chopper with sissy bars that I had as a kid to ever want one now. 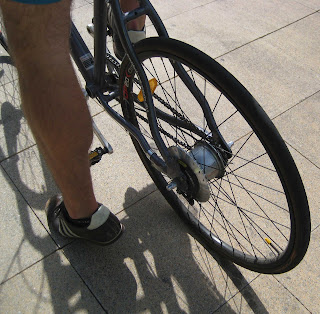 Check out the definition on that calf though. Riding a hundred miles a week will do horrible things like that to your major muscle groups.
Badly proofread by Boy on a bike at Monday, December 07, 2009