I've had this problem a few times at red lights, but this is the first time I've caught it on camera. Here we are, waiting at a red light. Note the white ute on the other side of the intersection, also waiting at the red. He's indicating he is turning right. 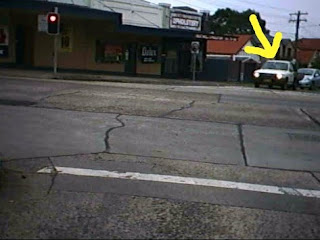 Lights go green, and ute pulls out. He sees me coming, and I have right of way. 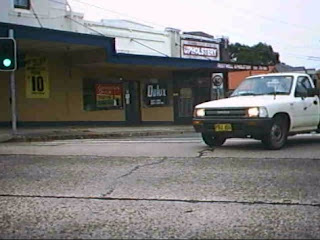 He doesn't care - he just blows through the intersection whilst giving me a look of "What the fuck are you going to do about it?" 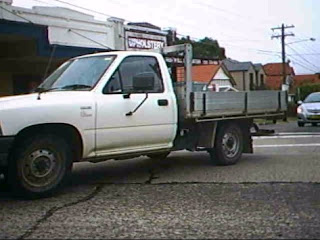 I don't know what it is about tradesmen in utes, but they are utter pricks to cyclists. There is something seriously wrong with their mentality.
It was early in the morning, so traffic was light and he was able to get away. This sort of thing has happened to me where traffic has been heavy, and I've decided to chase the bastard and caught him a few hundred metres later, jammed in peak hour traffic. I'm not particularly polite at times like that. I have heard of cyclists that carry a set of side cutters - they pull up alongside the offending car and snip the valves off two tyres.
Sweet revenge.
Badly proofread by Boy on a bike at Saturday, December 12, 2009