Even more idiots - just one of those days

Meet a not so friendly tanker driver. I first met this bloke when he overtook me on Lilyfield Rd as we were approaching a set of lights. He got a little bit closer to me than I would have liked, but not enough to really bother me. 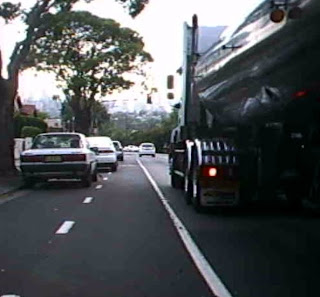 But here's a view of his details - a McColls truck with a Victorian plate. 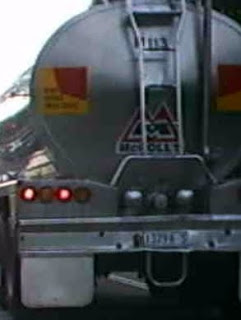 We had to wait at a red light for a minute. There was a small car at the front of the line, with the truck behind it. After the light went green, I zoomed off and tucked in behind the car, as up ahead, there was a bus parked on our side of the road, and buses parked in that spot always intrude into the bike lane. The best way to stay safe is to move right out of the bike lane, dominate the road, pass the bus and then tuck back into the bike lane. The speed limit along here is 50km/h, and I easily hit and hold that speed due to the long downhill. About 98% of the time, cars don't seem to mind cyclists doing that - so long as you are moving fast, they don't care. 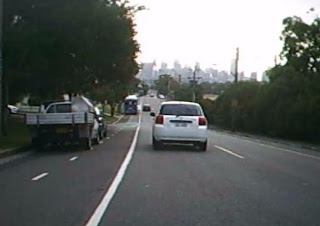 The truckie cared though - he pulled out and overtook, even though there was a car coming the other way, and he had to do 70 or 80 to pull that off. 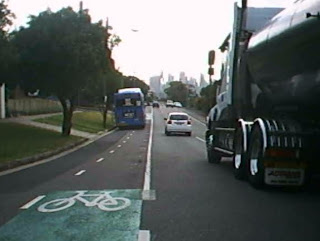 After getting around me, he had to duck back in sharpish in order to avoid a head on collision. Even though he is still over the white line at this point, note the gap between the bus and truck. I pulled out and took over the lane to expressly avoid getting pulped in a gap like that. I have no desire to end up as meat paste between a bus and a truck. Notice the truck has its brake lights on at this point - he had to brake hard to avoid hitting the car in front. 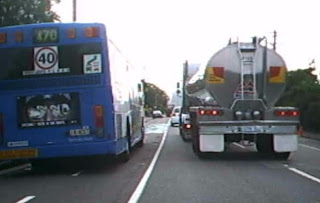 And here comes the car approaching from the opposite direction. The truck has only just made it back into our lane. 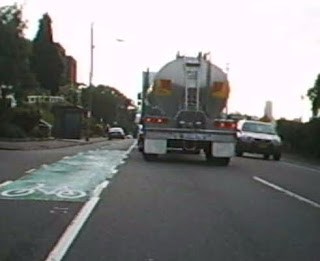 What does fuckwit do 100 yards down the road? He brakes, comes to a halt and turns right! 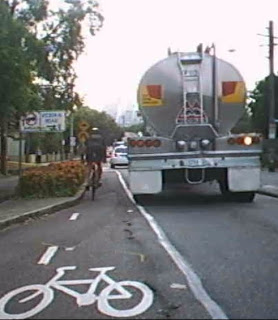 Exercising just the tiniest amount of patience seemed to be utterly beyond this idiot. Morons like this one need to be taken off the road. He was a hazard to me and two car drivers all in the stretch of a few hundred metres of road. Menace.
Badly proofread by Boy on a bike at Tuesday, December 15, 2009