Australian weather records - how much can we trust them?

After reading a few articles on weather stations in the US and Australia over the last year or so, I decided to do a random check on one station in WA to see what the records looked like.
I chose Cape Naturaliste, as I have visited it several times, and the lighthouse has been there for around a century. I guessed that the weather station would be at the lighthouse - and I was right. 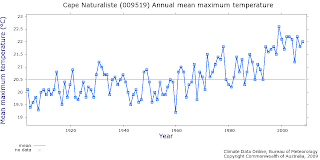 One glance at the annual mean maximum temp from around 1900 to today would convince most people that we are all about to fry.
However, I decided to have a look for photos of the site to check out the location of the weather station.
And I found these:
The weather station is located between the two buildings on the far right - and it is about a foot from an asphalt road. Note that the asphalt is a dark black colour - the colour of fresh tar. 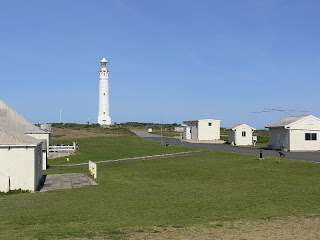 Here's a side on view. 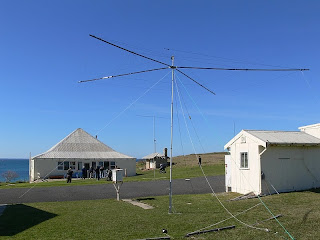 If memory serves me correctly, when I visited this place back in the 1980s, this was a gravel road - not tarmac.
If the weather station has not been relocated since 1901, what impact would moving from a gravel road to tarmac have on temperature readings? Undoubtedly, it would skew them upwards. The key question is when the tarmac was laid - or relaid - and what impact this has had on the temperature record.
-----------------
Bugger - memory must be worse than I thought. I've been to both lighthouses - as a school excursion in the early 1980s and then a few in the late 1980s when I was working at Yallingup. Can't believe I fouled the two up. All I can say is "thanks Google images for showing photos of Leeuwin when I asked for Naturaliste". I trusted Google more than my memory.
However, I am sure about the gravel road bit. When I first started regularly visiting the Dunsborough-Yallingup area in around 1982, it was not the heavily trafficked tourist and wine themed area that it is today. Most of the roads in all directions were gravel. They were only paved in the 1990s when tourist numbers reached a point where the gravel had to go.
As an aside, I remember family trips between Bunbury and Perth in the 1970s that involved driving along unpaved stretches of gravel on the main road between WA's capital and the next largest city (or town as it was back then). I remember it because we skidded on one section and nearly ended up in a ditch. It's now dual carriageway most of the way, but a lot has changed in 30 years as the area has grown.
-------------
Another update - this is how science should work. Check the facts, show your working, allow debate about your assumptions and results. If you are wrong, it's back to the drawing board.

Nice detective work, BOAB. I wonder if anyone out that way could tell us when the road was sealed?

Boab, the photos showing the weather station are actually those of the Cape Leeuwin lighthouse at the southern end of the Cape. The annual mean max for Cape Leewin looks innocuous:

But helps make it plain that the Cape Naturaliste record is dodgy. Google Earth at Naturaliste does show extensive asphalt car parks - the weather station is probably close by.

Hmm ... not sure I follow the logic here. Why would asphalt put down in the 1990s cause a steady increase in temperature over the last 90 years ? I'd expect to see a flat temperature graph with a step in the 1990s if this was caused by the asphalt.

Well done, youve got a callout from Andrew Bolt! Now standing by to observe the bump in the world-wide blog ratings...

And then I guess it's back to the Sydney commuting travelogues... :-)