Roundabouts - love them and hate them

I have a definite love/hate relationship with roundabouts. As a traffic control device, I much prefer them to Stop signs and traffic lights - if the road is clear, there is no need to stop and wait. You just power through them.

The Hate side of the equation comes from the occasional idiot driver that thinks that it is possible to safely fit a car and bike in a one-laned roundabout at the same time. When on the bike, I have to start planning how to tackle a roundabout when I am still a few hundred yards away. You can't just saunter into one like you do in a car - that's a one-way ticket to becoming a hood ornament on a BMW. It takes planning, and occasionally a bit of nerve and cheek.

About 1 in 100 roundabouts is actually bike friendly, like this one below. The nice RTA has put a bike lane through the roundabout on the left (there is no road entering from the left - it is a "three sided" roundabout). When zooming along in this direction, I can sail through the roundabout without having to give way to traffic coming from the right. At least that is the theory. Even with a roundabout as massive as this one, you'd be amazed how many cars enter from the right and spill into the bike lane on the far left. I could drive an oversized bus around this roundabout without touching the bike lane, but there is a "special" class of driver that can't perform that task in a Mini. Nice try by the RTA, but generally a failure in practice due to the fact that total tools are regularly issued with a license. A license to kill... cyclists.

See- here we have the bike lane snaking around the side of the roundabout. And a nice, wide car lane too. There is no excuse for a car to drift left into "my" lane - unless they are a BMW-driving tool. Of which, unfortunately, there are plenty. 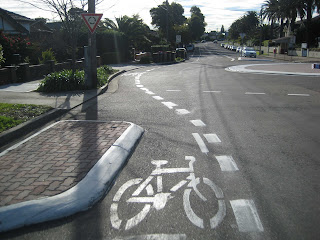 I'm going to bang on a bit here about roundabout design. Sorry about that. I was out riding on a delightfully sunny day and halfway through the ride I thought, "Sod it, I'm going to take photographs of lots of roundabouts". I got masses of photos, most of which I will not bore you with. When I started counting them, I was amazed at the number of roundabouts that this particular jaunt takes me through - I got to 9 and gave up.

Here is a small roundabout with a custom designed "bike crunching" island on the right. Note that there is a sort of bike lane on the left (it's actually a bus lane at this spot), but it dramatically comes to an end at this island. The only way to get through this roundabout is to get into the car lane, and the trick is to pick the time at which to do that. Since I am generally going about 10km/h slower than cars at this point, you don't want to dive in too early, as BMW and Mercedes drivers get very, very frustrated if delayed for more than 0.8 seconds, and they are apt to do something incredibly dumb after that amount of time. However, you don't want to leave you run too late, as the driver behind and to your right might just not let you in. Good way to either smash into the concrete island, or become a hood ornament. It's a judgement thing, and it varies from roundabout to roundabout depending on traffic levels, the grade of the road and the "sharpness of the pinchiness". 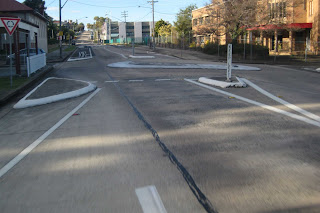 Here is the next roundabout, with yet another bike crunching island denoted. See how narrow the lane is through here, between these two lumps of concrete? Buses struggle to get through here without leaving lots of rubber on each island. 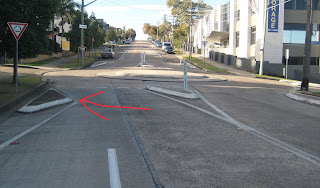 Yet another roundabout. This one has a nice, wide car lane - but as usual, this tool in a BMW can't even stay in their lane as they exit from the roundabout. Yes, there are no bikes in front of them in the left hand lane (which is a parking bay), but BMW drivers tend to do this sort of thing whether there is no bike in front of them or even when there is one. I reckon they get in their car and suddenly think they are on the Nurburgring. Twats. At least this place has a church on the corner, so I can get speedy last rites if collected by some Germanic pressed metal. 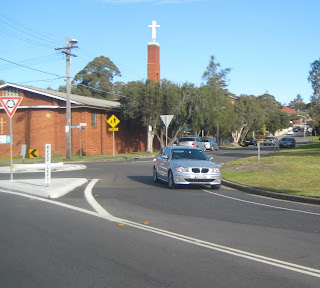 Another stretch of road, with me in the parking bay. Unless there is a game of cricket going on at the oval to the left, there are rarely any cars parked along here, making it a great pseudo bike lane. But see that it ends just up ahead, right before the roundabout, and once again, I have to decide when to pull out and start "dominating" the lane, so I can get into the roundabout without some jerk wanting to overtake me. What I mean by dominating is that instead of riding to the left, I get out into the centre of the lane and hog the road. If I think a driver is tempted to overtake, I'll go even further right to block the bastard out. That doesn't always work, as I had one complete twatter go around the roundabout the wrong way, they were so desperate go overtake. I didn't care - just glad they didn't meet a car coming the other way. Frankly, I was glad they went around the island the other way, because they were well separated from me. 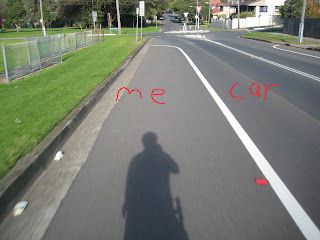 Pinch points - gotta hate these spawn of satan. Again, certain drivers think that if a bike is cruising through one, they can fit their BMW X5 through as well. Not going to happen, me thinks. 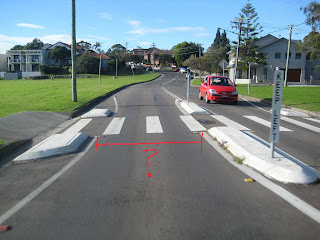 See how little room there is between this bongo-van and the kerb? Most BMW drivers think that a bike will safely fit into that gap. This is why I dominate the lane and never, ever let the fuckers overtake, because this is all the room they will leave you. 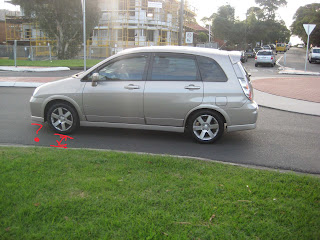