Commuters in the mist

Whilst I refuse to shave my legs for that "aero" look, I don't think I am hirsute enough to qualify as a "gorilla" in the mist. Today was my first ride to work in over 6 months. That meant rolling out of the farter at 0630 and stumbling around for half an hour collecting my wits and my things. It took me 40 minutes from the alarm going off to putting rubber on tarmac. I used to be able to do it in 15 minutes, but I frequently spent the first 10 minutes of the ride in a completely sleepy daze, not concentrating on where I was going. I prefer to potter around for a bit longer these days, doing my best to put brain into gear.

It was 8 degrees when I hit the road, which required almost my entire "battle-rattle". I left out the lightweight skullcap that sits under my helmet, keeping the onrushing wind off my thinning hair, and decided not to wear an undershirt. If it had been raining, I would have pulled both on, and although the roads were wet, the sky was clear.

The sun had not been up for long when the cranks started grinding around and around. When I rode up this hill, I went from darkness into dawn in a big way. The shadows disappeared and I found myself riding straight into the rising sun. 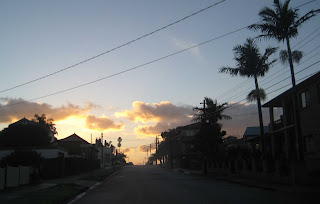 Mist, mist, mist as far as the eye can see.

The morning mist coming off the Bay was something to behold. 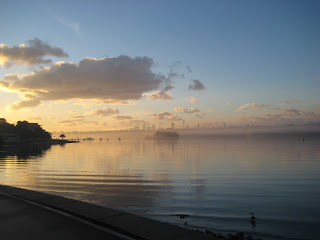 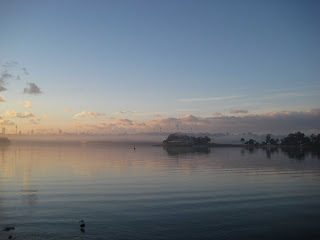 The island out in the Bay was hard to see for once. 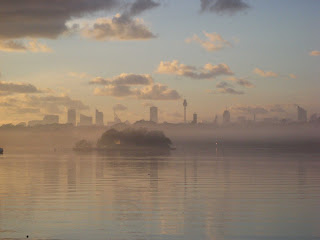 The photo below looks great when viewed full size. Although that is a rowing club on the right, there weren't any rowers out there in the mist. 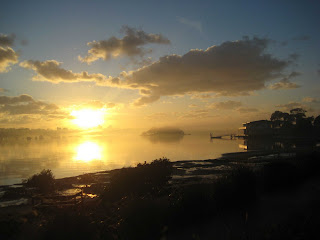 Confusion. Note the car with its back to me in the middle of the photo - it's driven down the footpath to reach this point. There was an old guy at the wheel, and he looked mightily confused. 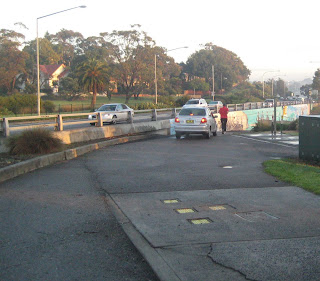 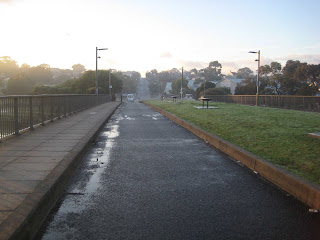 The air was almost perfectly still this morning - there were some big puddles across the path here and there (nothing to do with rising sea levels), and the water in them was utterly still. Check out the perfection of the reflection in this puddle. 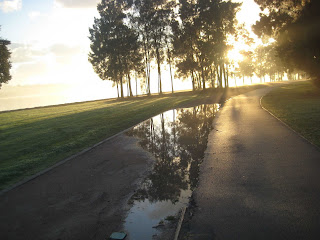 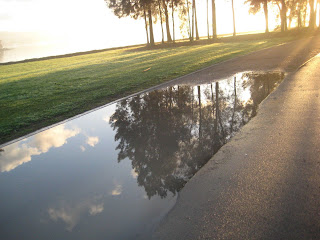 On arriving at work, I discovered that I had left my bike lock at home. That prompted a scramble to reach the closest bike shop at opening time to buy a $49 chain lock. Thankfully, the bike was still there when I returned.

I also found that we have a "power shower" on our floor. That's me being ironic. Some environmental wanker has fitted a shower head that delivers only a trickle of water. It took me twice as long as usual to shower due to the pathetic flow of H2O.

The return trip home showed that I was right to not buy a set of full length knicks - I wear shorts with a set of leggings tucked into them when it gets cold (like this morning). It was 20 degrees when I set out for home, which meant the leggings went into my back pack. As it was, I wished for a set of fingerless gloves instead of the full length ones (that keep my fingers from freezing off at 0700) and before long, I wanted to stop and stuff my jacket into the backpack as well - except that it was full, so I just had to sweat.

I relearned a lesson this morning as well. When I ride, I eat well. I eat proper. I really watch what I chow down on because I don't want to get on the bike feeling bloated and icky. That meant breakfast was an omelette (which turned out to be great) and lunch was a smacking big salad. I avoid anything that's greasy or fried when I ride, so things like Indian and fish & chips and burgers and Chinese are off the menu. Instead, I live on Japanese (lots of sushi and sashimi) and salad (if I can find a good salad bar nearby). I even had to pass on the opportunity to have some free drinks tonight in the office - beer and riding up hills do not go together at all.

The only downside to riding in today is that I was slow. Slooooow. Four cyclists of the kind that I would normally leave for dead went past me. It's going to be a long road back to a reasonable level of fitness and speed.
Badly proofread by Boy on a bike at Friday, June 19, 2009

Nice photos BOAB I must say.

Only a very small car could confuse that bike path for a road. The Volvo wouldn't stand a chance.

I feel your pain, I've just started riding again after a long layoff, unfortunately living in Michigan (US) our roads are usually in bad shape...that would be the norm (think cobblestones on Paris-Nice).....it takes longer to toughen up the bum than to get my legs back.