Thought that was a typo did you - that I'd be talking about fatted calves rather than fatted paths.

Nope, I did get it right. I spotted this work crew during the week ripping out one of the horrible little ancient paths around the waterfront and replacing it with a great swathe of concrete - a path so wide and concretey that it would make Bob Moses proud. 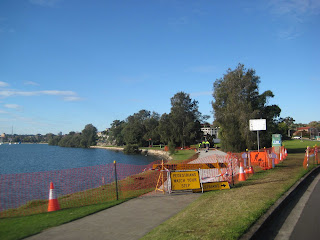 Hooray for that. Most of the time, I stick to the road when out this way because the paths are so narrow and crap. I'd prefer to be off the road and away from the idiots in their BMWs, but you can't always get what you want.