I like graphs. It has been a while since I have cooked up a decent pie chart, so I thought I would grab some numbers from act!onaid and see what I could do with them.

Chart 1 shows a breakdown of act!onaid's finances, as derived from their published financial statements. I have interpreted them as best I can.

act!onaid raised the better part of $8 million last year from various sources (as this a pie chart, perhaps I should recast that as "sauces") and spent around $2 million on expenses. At a glance, this looks like a reasonable charity, as the overheads and expenses are "only" 25% of total income. 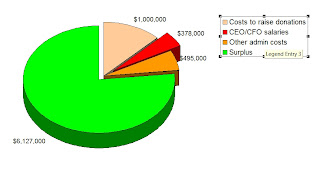 However, if you strip out the $6 million that the government gave them, the picture changes. Suddenly, they are making a surplus of only $127,000 on $2 million worth of private donations. That gives them an expense ratio of 93.6%. ie, of every dollar donated privately, 93 cents are swallowed up by salaries, rent, computers, cars, fundraising expenses and so on. By that measure, this charity is not very effective.

The red slice of the pie shows the costs of "key management personnel", which as far as I can tell, are just two people - the CEO and CFO. If government funding dried up tomorrow for this charity, but their expenses did not change, then the CEO and CFO between them would be taking out of the charity three times more cash than the charity would be spending on "good works" - $378,000 for them vs $127,000 for the starving plebs. The two top executives are taking 19 cents in the donated dollar between them. 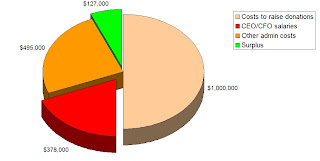 I feel justified in working the numbers this way for the following reasons:

This next graph shows how they really raise their money - that little blue slice is the surplus left over from private donations. 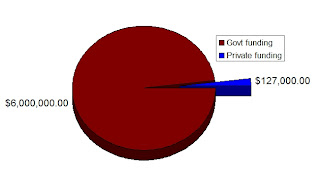 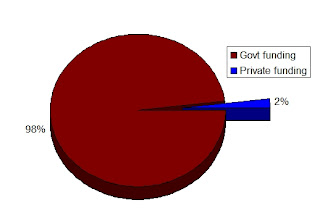 If 98% of your "spendable" funds come from government, are you still an independent charity, or are you now an arm of government?

If the government decided to take over the activities of this charity, I'm sure the public servant placed in charge of spending a paltry $8 million per year would not be drawing a salary of $177,000 or more.

You really have to wonder why a charity is paying salaries at this level. Surely those that want to work in the charity sector are happy to work for less-than-market pay rates because of the nature of the business?

Oh, and by the way, the interests of this charity appear to have morphed from giving poor Africans a shovel and some seeds to this - the national climate emergency rally.

Australia must shift to 100% renewable energy from wind, solar and other existing technologies within a decade.

Loonies. Unless they mean nuclear power.
Badly proofread by Boy on a bike at Thursday, June 18, 2009

Seems to me someone needs to stand up against the rich (ie the CEO and CFO) and merge the operations of this waste of space with some other char!ty.