What a great day to go for a short ride. I had to try and sandwich some pedal time in between knocking off work and monkey collecting, and I managed to do so - a short jaunt of a bit over an hour.

I was unable to play the chick game of changing clothes every 30 seconds today because I couldn't find my undershirt. I packed my jacket into a backpack and went outside to put my shoes on..... and there was my undershirt, sitting on a chair, just where I had left it when I removed it on the last hot, sunny day. The bike thermometer was showing 26 degrees, although it only felt like maybe 22 at most. Who cares. I had the short gloves on, no jacket, and it felt great. Not a breath of wind either.

Just look at that - ok, it's not the Eiffel Tower as far as a view goes, but we've got blue skies, crystal clear water and fluffy clouds in late June. 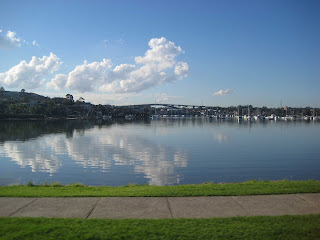 On more mundane matters, the guys who are working on widening this path into a proper cycle/pedestrian path have advanced a bit since I was last down this way. It's now 100 metres down, 58,999.9 km to go. 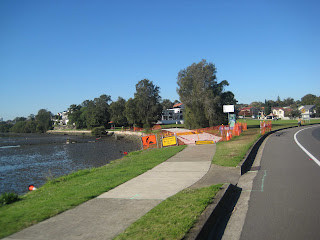 I think this is a pretty ugly boat. I was hoping for a photo showing a better reflection. This is not about boat envy or yacht-fondling; it's simply about trying to frame a neat photo. Fail. 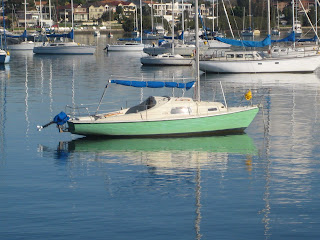 A while later, I was toodling around a bend when I got a face full of dope smoke. I stopped and had a look around, and found that the source was this mung bean strolling along the mud flat. I watched him for a minute, and all he did was stagger around in confused circles. If you're going to get stoned somewhere, surely there are better looking places than a stinking mudflat? 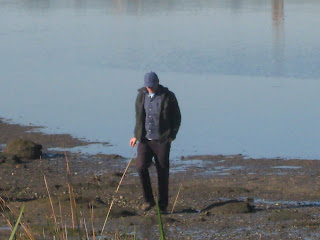 Then again, if you are a stoner, goodness knows what you are thinking.
Badly proofread by Boy on a bike at Tuesday, June 23, 2009