Ashfield Council, God rot their souls, have decided to use money extracted from their long-suffering rate payers to erect a series of signs around the Bay Run in homage to Al Gore and the IPCC fairy tale. I counted signs like this one at four different locations - I'm sure those Ashfield twits would have erected more, except that the only control a small portion of the Bay Run. That, by the way, is a terribly badly build and maintained section of the Run. Ashfield spend all their money on crap like this and not enough on fixing pot holes and cleaning drains. 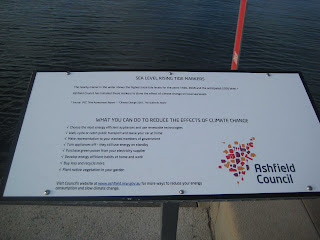 The nearby marker in the water shows the highest local tide levels for the years 1920, 2006 and the anticipated 2050 level.*

Ashfield Council has installed these markers to show the effect of climate change on local sea levels.

WHAT YOU CAN DO TO REDUCE THE EFFECTS OF CLIMATE CHANGE


The photo below shows a marker. 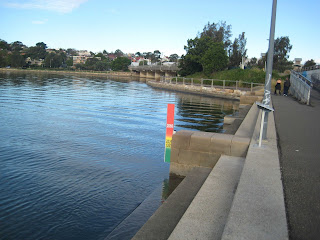 Here is another one by the side of the rowing club. 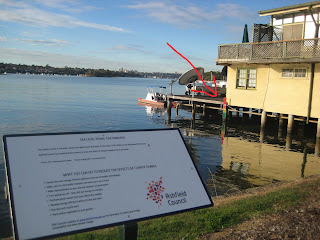 I wonder why these chose the high tide level in 1920? Could it possibly be that 1920 is the lowest high tide on record, thus making the increase look scarily large?
Badly proofread by Boy on a bike at Monday, June 15, 2009

Ah yes. When politicians have no idea what else to do with other people's money, they turn to plaques. A plague on those plaguey plaques!

Our eldest's school is getting some "Gillard" improvements. I will have to ask that they mount the plaque in the kid's toilet block.

TimT
You could use a "poxy" in there somewhere...