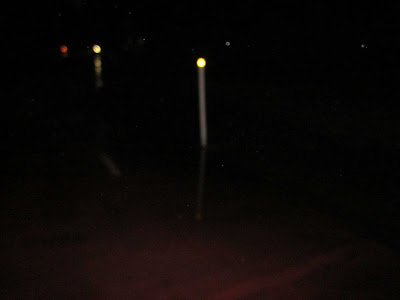 Not long until the end of daylight savings - then I'll have a month or so of riding with a bit of light in the morning. Not sure what the above photo is supposed to be of - might be an accidental shot. 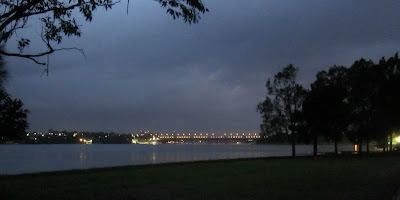 Our $175 million white elephant bridge, nicely lit up in the pre-dawn light.
The state election was last weekend - the Liberals (conservatives) won with a massive landslide. The socialist Labor party were totally destroyed. The local Labor candidate thought he was going to win - he ended up with 33% of the two party vote vs 66% for the Liberal. The swing was monstrous - 24%. And the Labor candidate was supposed to be the good candidate, after the sitting member got the boot for stuffing up some paperwork. If she'd stuck around, she might not have made it into double digits with the vote.
There are now plenty of people claiming that the proposed carbon tax had nothing to do with the vote. Well, I spent part of the day hobbling around the poorer end of our electorate (did my back in the day before voting) and the snippets of gossip that I picked up whilst standing in queues (in agony) indicated that it did have an impact on voting intentions - just not as big an impact as all the problems with Labor corruption, stupidity and wastefulness. It's like saying that the deep stab wounds in the body were less of a problem than the missing head.
Badly proofread by Boy on a bike at Thursday, March 31, 2011