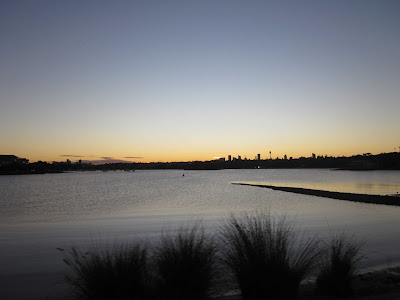 To start with, two pretty pictures of The Bay at sunrise. Are you getting sick of these? I'm not. Before long, it will be cold and wet when I leave for work (rather than coolish and pleasantly dry), so I am making the most of it. I like how the water on the far side of the mud bank is almost perfectly, glassily still. There's two pelicans in the water searching for breakfast. 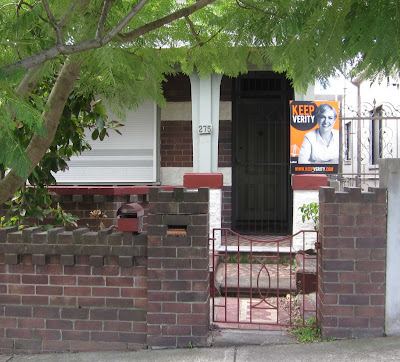 I noted a few days ago that Verity Firth appears to have next to no support from individual householders in her electorate - there are plenty of signs up on power poles, but precious few in front yards. Scrap precious few - I have only seen two. This one in Lilyfield and another in Glebe. There are sure to be more out there (I haven't covered that much of her electorate), but the difference in the number of Labor signs in front yards between Balmain and Drummoyne is immense. 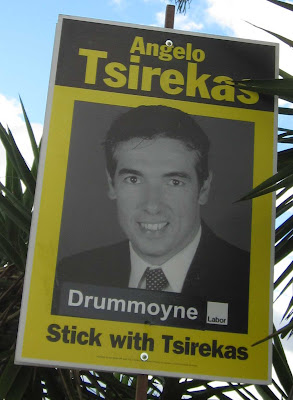 Speaking of which, here are two versions of Angelo's sign. The first is a recycled one from an earlier mayoral campaign (he's been mayor now for 8 years). The "Drummoyne" bit is actually a big sticker that's stuck over some other slogan - probably something about electing him as mayor. He certainly looks a lot younger in that photo. The "Labor" logo is part of the original poster though - even back then, he wasn't into advertising his affiliation with that party. 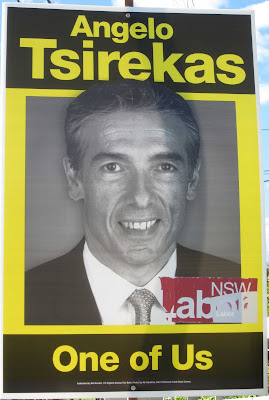 And here is the modern version - a bit more grey, a few more wrinkles (I know how that feels). If he fails to get up this weekend (the election is tomorrow), I wonder if he'll have another crack in four years time?
Badly proofread by Boy on a bike at Friday, March 25, 2011

This mayor Tsirekas has cheated on his wife for years!