MySchool - why is it so? 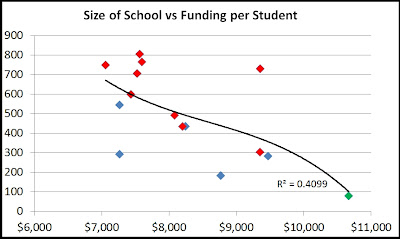 Arguments regarding the amount of funding that different schools are getting are likely to rage on for the next 10 years. One statement that I read today was along the lines of, "State schools get less money per student because they are larger, and thus more cost effective". I thought I'd put that to the test by looking at the data from the Chatswood area - you make up your own mind.
First graph - size of school vs funding per student. The R-squared is 0.4 - not that crash hot. However, it does appear that larger schools get less funding per head - there is some relationship there. Just remember that correlation does not mean causation. 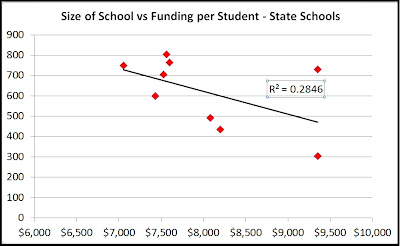 I decided to just look at State Schools alone - the R-squared drops dramatically to 0.28 - which means almost no correlation. This needs to be tested against a bigger data set, but so far, that idea is not looking good - at least in the state system. It could turn out to be an urban myth. Or more data might prove it. 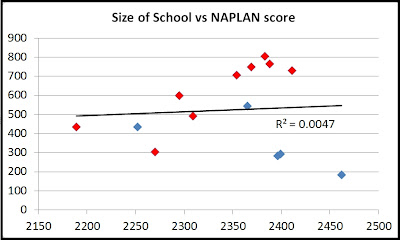 But do we just care about cost, or is performance more important? I therefore decided to look at the NAPLAN scores for grade 3 vs the size of the school. When Catholic and State Schools are mixed there is almost no correlation whatsoever. 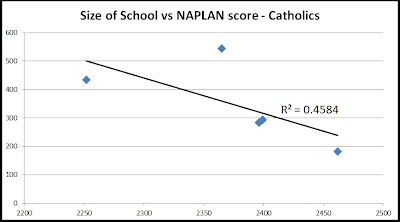 However, when you split them out, look at the difference. For Catholic schools, it appears that smaller schools deliver better NAPLAN results - the R-squared is 0.45, which is sort of reasonable but definitely not great. There is a weak correlation there. 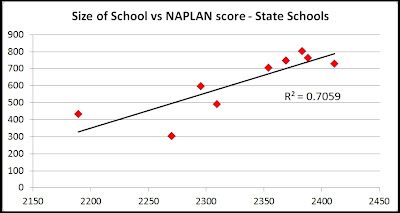 But look at the state schools! The bigger the school, the better the results - and the R-squared is 0.7, which is pretty damned good.
Just remember one thing - this is looking at bugger all data. It's late, and I'm going to bed. I will crunch more numbers tomorrow and over the weekend.
1735099 - what's your opinion on this?
Badly proofread by Boy on a bike at Thursday, March 10, 2011

Boab, don't ask that clown 17..&%$ anything.
Stock answer is "I was conscripted to Vietnam and I detest conservatives".

BOAB
You asked for an opinion - and that's all it is. I'm no statistician. What I've seen over 40 years would make me believe that school size is a factor as it relates to student performance, but not a major one.
My work these days is supporting small bush schools where there are kids with major disabilities enrolled. "Small" means many of them have enrolments less than 50, and some as tiny as 10 - 15.
My observation is that providing that the teacher/s is/are half competent, these are fantastic environments for learning. These schools turn out resilient, independent, resourceful kids. They're great places for kids with disabilities.
The ERIC digest has something to say on this - http://www.ericdigests.org/2001-3/size.htm
The studies are American, but findings probably hold here.
PQ, I tried to link this with Vietnam and Conscription, but failed. Sorry to disappoint.