Everything in this post relates to primary schools only. I put up two more posts on this subject yesterday - read them first if you are new to this.
The work in this post was suggested by 1735099, who actually teaches, so I hope this adds some value.
What I did yesterday was to crunch the numbers on two different areas - a high wealth area and a low wealth area (Five Dock vs Fairfield). One is full of old migrants who have done well for themselves, and the other is full of new migrants who are struggling to get off the ground.
The idea of this post is to see whether there is a connection between the amount of money that a school gets and the NAPLAN scores the kids get.
In order to do that, I invented the BOAB Naplan index - essentially I took all five of the NAPLAN results for grade 3 and added them up. It's not an average - it's a total. I am the first to admit that it is not terribly scientific, but it's the best that I can be bothered coming up with on a Sunday afternoon. 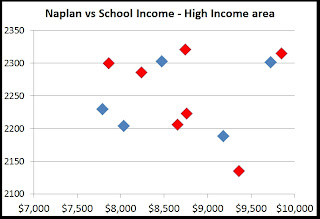 Here's the results from the high wealth area - it's a bit of a mixed bag. The best NAPLAN scores in our area are delivered by two state schools. I tried adding a trend line - forget it. By the way - the red markers are state schools, and the blue ones are Catholic schools. 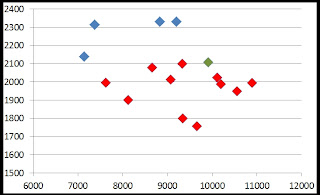 I then did the same for the low wealth area. Out west, the Catholic schools perform better (or since this is looking at Grade 3 results, they attract a better class of student). The Catholic schools also deliver a good result at lower cost. The green marker is an Independent school. 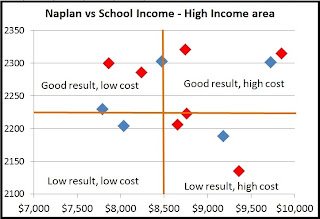 Now we apply the good old BCG matrix idea to the graphs. This is all arbitrary by the way - I adjusted the minimum points on both axis, and then drew four quadrants over the data. It's quick and dirty, but it provides an interesting way to think about how schools are performing. As taxpayers (and school fee payers), we want to get the most bang for our buck. We get that in the top left hand corner - schools up there are stars. They get good results at low cost. Schools in the bottom right hand corner are dogs - expensive, low performers. I'm going to call those in the top right corner the "prestige" schools, as they provide good results at higher cost. I'll let you lot think of a name for the bottom left corner - low cost, low results. 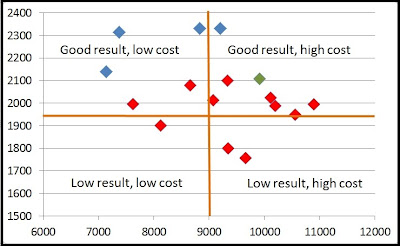 Where this gets interesting is when we apply it to the low wealth area. We suddenly find that the Catholics do well in the "star" category - low cost, good results. The state schools do well at getting reasonable results, but at higher cost. 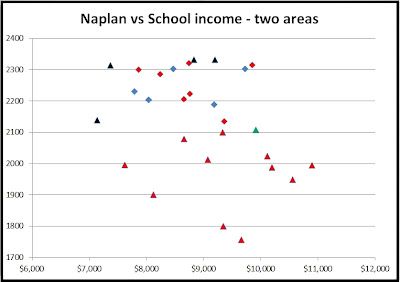 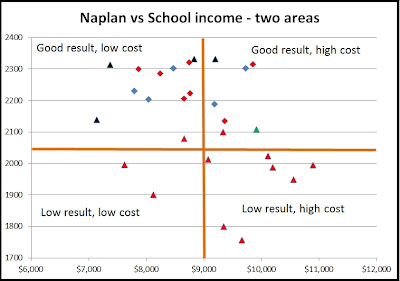 Here, maybe a few lines on the graph will help. What do you see? 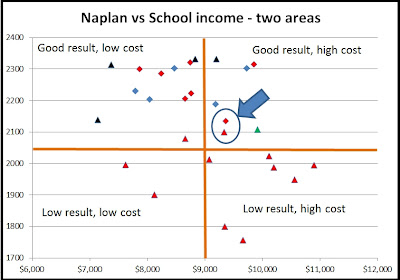 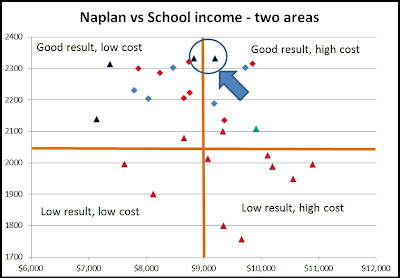 Here's those two top performing Catholic schools.
All this has to be taken with a pinch of salt, as we are looking at one made up NAPLAN index across two areas, and only for grade 3.
That said, I think it conforms a lot of folk wisdom.
In poor areas, the Catholic schools are attracting the "better" kids (for want of a better term).
In a well off area, it probably doesn't matter what type of school you go to.
My question is this - we're pouring money into state schools in poor areas. Are we getting results commensurate with the effort? I know that for many people, their first reaction will be, "We should put more money into this area". But is that the right reaction? Can you make a silk purse out of a sow's ear?
Badly proofread by Boy on a bike at Sunday, March 06, 2011

Well spotted.
No surprises here. I wonder why we need a website to tell us something that as teachers and parents, we've always known?