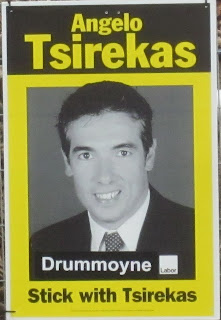 As requested by the Tizona Group, I bring you four more election posters. I did a special ride today, just for you guys. First off, we have the current Mayor of Canada Bay, Angelo Tsirekas. He has a few different posters, all similar to the one above. I think this is actually his old mayoral campaign poster, with a "Drummoyne" sticker stuck over his old mayoral election slogan. Labor have written this seat off, so he's having to make do with a budget of sweet FA.
God knows why he went with yellow - I always associate that colour with cowardice. One thing I have noticed though - he doesn't try to chat my partner up when I accompany her to functions he's attending. Rumour has it that he got a bit too friendly with ladies other than his wife last year, and was booted out of the marital abode. It appears things have since been patched up. He's got excellent name recognition though, having been mayor for years, so I think he is in with a reasonable chance. The Labor voters that were walking around six months ago saying that they'd never vote for D'Amore (since hauled up before ICAC on corruption charges and suspended from the Labor party) will vote for Tsirekas. His name doesn't stink like D'Amore's did (she is also Joe Tripodi's sister-in-law). As a newbie, he also isn't associated with the wretched Labor government. 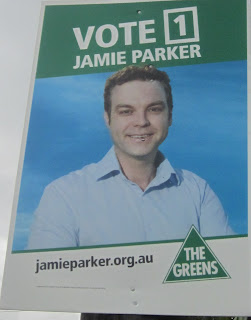 Jamie Parker, who is the Mayor of Leichhardt. He's hoping to knock off Verity Firth in Balmain. Although he's a Green, he's been spotted parking his big black Mercedes some distance from functions and then walking so that people don't get the idea that he is in fact a rich, capitalist plutocrat. He's certainly richer than the other candidates shown here. I hope that all that blue sky in the background isn't full of CO2. 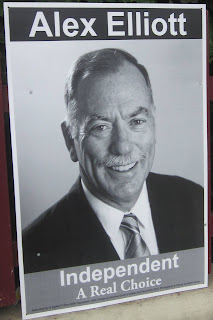 Alex Elliot - never heard of him, and don't ask me why he went with black and white. Cost perhaps? It stands out though. 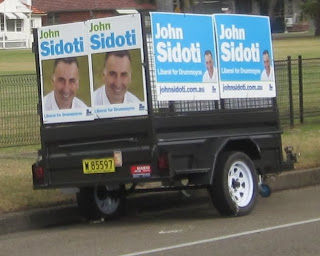 John Sidoti, currently Mayor of Burwood and the Liberal candidate (sorry about the distant photo - the road was too busy to cross - will try to get a better photo). It's always fun around here when the elections are Greeks vs Italians. Sidoti has added a large format poster to his repertoire - the ones on the right of the trailer. They really stand out. Interesting how the Liberal is photographed on a green background, and the Green on a blue background (traditionally the conservative colour).
More to follow after the next ride. I didn't spot a poster for the Liberal candidate for Balmain this morning - I know they are out there, but there weren't any in the spots that I rode around today.
Badly proofread by Boy on a bike at Saturday, March 05, 2011

BTW my word verification is 'redlyr'.

Link away - I won't complain.