I always get a chuckle when I see Angelo's signs - especially since one of his main campaigners had a torrid time with ICAC last year. When his supporters claim that he is "one of us", what exactly do they mean? Which "us" is he linked with? The type of "us" that end up being grilled by ICAC investigators?
One thing Angelo doesn't want to be known as is the Labor candidate. Spotted these two posters outside a house on a major intersection. Some kind soul has come along and stuck a much bigger "Labor" sticker over the tiny little Labor logo. By the look of the stickers, panic has ensued and the householder has done their best to erase all linkages with Labor. 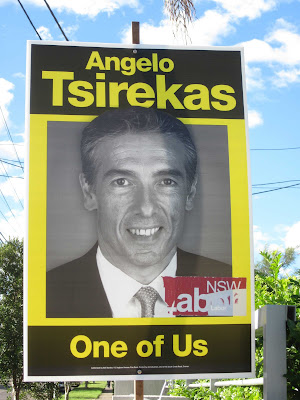 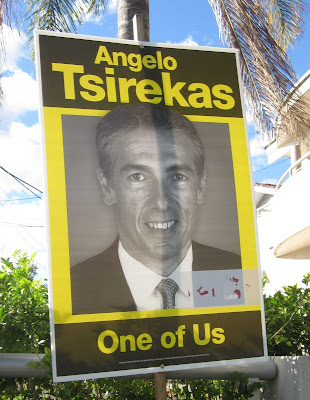 I think he has a reasonable chance in this area. Whilst Labor are on the nose, he's a fresh candidate with a great local profile. If anyone can win the seat, it's him. It will be interesting to see if his profile is enough to overcome the local Labor stench.
There's a stark difference between our electorate and Balmain when it comes to candidate's signage out the front of private houses. In our area, a lot of people support Angelo enough to have his mug in their front yard. I took a trip into Balmain and Glebe on the weekend - whilst there are a lot of Verity Firth posters up on power poles, I didn't see a single one in a front yard. Not one. Lot's of posters on poles shows she has an active campaign team running around nailing them up at night, but the lack of posters in front yards shows just how little grass roots support she's got compared to Angelo.
Badly proofread by Boy on a bike at Thursday, March 24, 2011