Cav has asked me to put my photo caption underneath the photos, rather than above them. Christ on a bike, the world is full of critics. I'll give it a go - just this once. I know that the traditional book style format is to put them underneath - that's what I grew up with too. Ugh - this is going to be a wrenching change. Bloody hell Cav, why can't you old farts get with the program and move into the 20th Century! 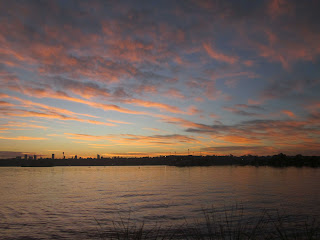 This is a caption below the photo. Bloody hell - now I know why I type my narrative above the photo - the blogger composing layout is completely crap for typing below a photo. I knew there was a sensible reason why a wise man like myself would put captions above photos. Since I've been typing, the photo above has scrolled out of the composing window, so I have no idea any more what's in the photo. You'll have to tell me. I think it is two penguins having sex in Antarctica. 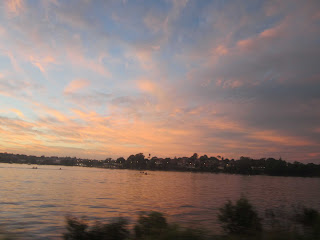 Here's another photo - blast, it's scrolled away too as I've typed. I think it's a photo of my hairy knee, complete with rooftop construction induced scar. No, I scrolled up and found that it is actually a big collection of rowers getting setup for a race. They're hard to spot in the early morning light, but there was over a dozen shells out there when I went past. 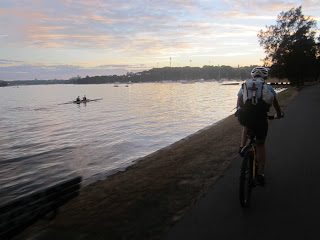 How's that for a montage of early morning Bay activity? All the above photo needs is a jogger tripping over an errant dog, and it will be complete. 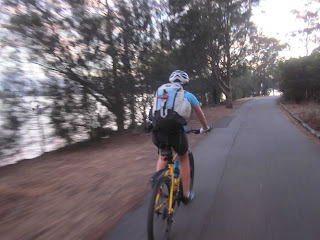 The early morning light is great for these action shots - the shutter needs to stay open longer, which produces a great bit of blurring. 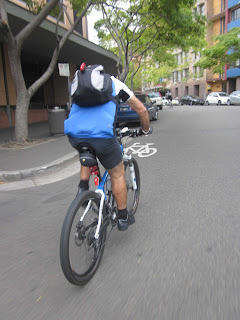 This bloke had the most incredible calf definition. Only thing I will point out is that my legs are even hairier than his. When I was at uni, some mates held me down one night and tried to shave my leg. They removed a section of hair about an inch and half long, and then gave up as the razor was irretrievably clogged. I could have been a stunt double on Planet of the Apes.
Badly proofread by Boy on a bike at Wednesday, March 02, 2011

What a magnificent blog this has become.

Maybe a change to man on a bike?

Ah, thanks BOAB (and CAV), my mornings are less confusing now that the captions are beneath the photos!!

If the first photo is the penguins, it mus be one hell of a long shot.