MySchool - and now we examine Chatswood

This is the fourth in a quick series based on the MySchool website. If you've just arrived, scroll down a few posts and start at the beginning. This post is based on Chatswood, a wealthy area on Sydney's north shore. It has been so effectively colonised by successful Chinese immigrants from places like Hong Kong that a former staff member of mine (who was born and raised in HK) called it "Chatswoo", as in "it is full of people called Woo". The Chinese are notoriously pushy when it comes to education. Chatswood Public for instance has 83% of its students coming from LBOTE (Language Background Other Than English) - but it has the 2nd highest NAPLAN score out of all the schools in this sample. Just goes to show that a LBOTE background doesn't necessarily mean a lousy school performance.
The state school and Catholic ICSEA scores for 17 schools in the area are equal on 1189. By comparison, that's about 80 points higher than where I live (the higher the score, the wealthier the area). 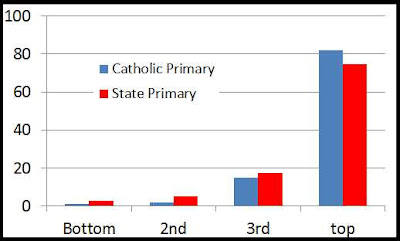 The income quartiles paint a very nice picture of the area - there is almost no one in the Chatswood area in the lowest income quartile. The top quartile is packed for both state and Catholic schools. 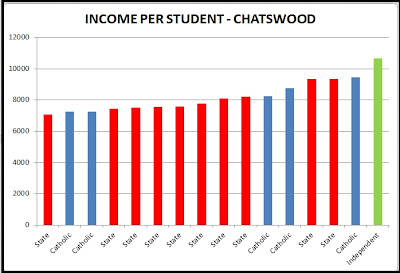 The amount of funding that the schools get per head doesn't vary that dramatically in this area. Even the Independent school doesn't charge outrageous fees. 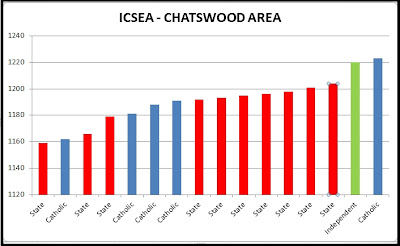 The ICSEA scores are also clustered together pretty closely - the scale on the left makes it appear that there is quite a difference, but as I've said before, in a wealthy area like this, the difference in scores is like comparing a family with a 5 series BMW to a 7 series BMW - and then comparing them to the people out in Fairfield in the 3rd hand Corolla. 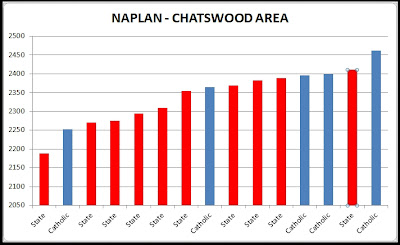 There is a reasonable spread of NAPLAN results too, with the Catholics doing well up the top. However, all these scores are excellent. Looking at this table is like looking at the Gold, Silver and Bronze winners at the Olympics - the person that took away bronze is still an awesome athlete. 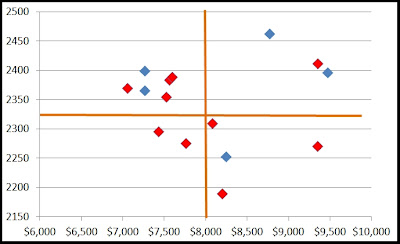 The above graph shows the total NAPLAN scores for Grade 3 compared to school funding per head. Again, this is pretty arbitrary for this area - those scores are all very good, and compared to a poor area like Fairfield, the amount of funding per head is low. In other words, all these schools provide good results at a reasonable cost. 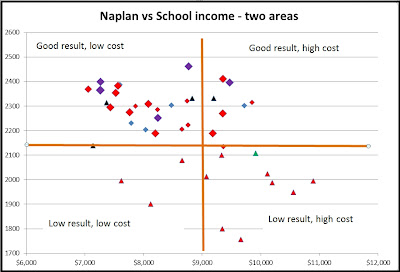 This is where things get funky - this graph shows the results from three areas - a low income area and two high income areas. For this graph, I've increased the size of the markers for the Chatswood schools. What sticks out to start with is that all the Chatswood area schools on the top side of the NAPLAN scores. All of them. Same goes for the Five Dock schools - every one of them is on the top side of the line. With Fairfield, every state school is below that line - only the Catholic schools from that area are performing on par with the state schools and Catholic schools from the richer areas.
The second thing that struck me is that in terms of value for money (or scores for bucks), almost all the Catholic and state schools in the Chatswood area are good value. Most are in the top left hand quadrant - the "stars" quadrant. The four that don't make it are reasonably close to the line. 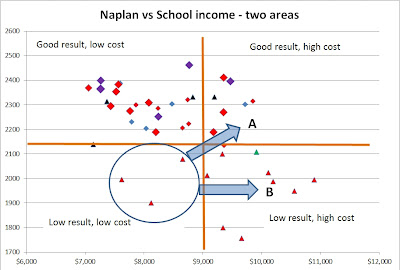 Here's the big challenge for policy makers - the problem schools are those below the line. In other words, in our sample, every single school in the poor area. They're either low cost and poor performance or high cost and poor performance. How do you improve their performance?
There are those that repeat endlessly that the problem is a lack of resources - that state schools need more resources. Well, I think I have just shown that not all state schools need more resources - those in rich areas are doing fantastically, and they're doing it with the same or less money than the state schools in poor areas.
Let's take the schools in the "sink" quadrant - low cost, low performance. Let's assume we throw more money at them - they can move in two directions. The preferred direction is to move towards "A", which is into the more expensive, but high performance quadrant. The worst possible result is for their results to flatline, but their costs to increase dramatically (option "B"). It would be interesting to look at the finances and results of these schools over time. For instance, were those schools in the bottom right hand quadrant in the bottom left hand quadrant a few years ago? Have they been showered with money, but done nothing useful with it? (Makes you wonder what impact all that BER spending is going to have). 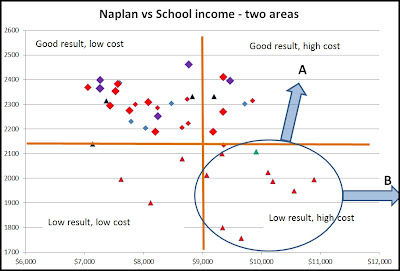 What gets me about the above graph is that we are more likely to follow option "B" rather than option "A". Option A is not about throwing more money at the problem - it is about qualitative improvements in the school. It is about turning around the culture of these schools - something that's probably dreadfully difficult. It really is so much easier to just take more money from the taxpayer and talk loudly about throwing it their way, rather than doing the hard yards of micro reform. 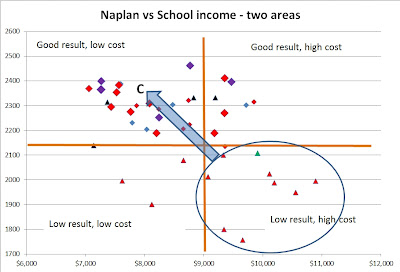 The best possible result of course is to wind back the spending on the expensive under-performers whilst improving their results. Now that would certainly be a challenge - but this is the sort of thing that happens in business on a regular basis. Because if not, the business goes bankrupt. If you're a business and you're in that corner, basically you're fucked. It's time to turn around or liquidate. 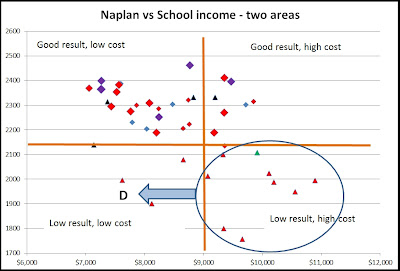 Another option is to just accept that perhaps there isn't much that the schools can do for these kids, regardless of how much money we throw at them. What counts more highly is the background and culture of their families, and how much support and encouragement they give their kids. In that case, we do two things - we stop dreaming that all kids can be super stars, and we do our damnedest to identify the smart and capable kids in those areas and we yank them out as early as possible and send them to a good school in a good area, where they are surrounded by kids that support academic achievement. Or we give them a top-up voucher to send them to the local Catholic school if they are too poor to afford the extra fees.
Badly proofread by Boy on a bike at Sunday, March 06, 2011