MySchool - education bang for your buck

OK, just to keep Cav sane, this is the last post with numbers and graphs and things for tonight. Normal bike bum service will resume tomorrow.
I have made up a new index - the number of funding dollars per student required to produce one NAPLAN point.
That is, if a school gets $8,000 in funding per student, and the NAPLAN score is 2,000, then it takes $4 to produce each NAPLAN point. The lower the number, the more effective a school is at turning our money into education (or at least the ability to do NAPLAN tests - the two are not necessarily the same). But just go with me for a minute.....
I then decided to compare the "BOAB index of educational efficiency" with the ICSEA score for each school. The ICSEA score tells you how wealthy the area is. Let's see how things went.... 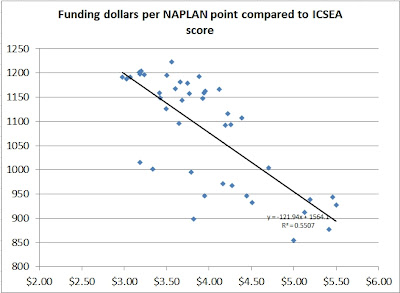 For starters, there's a pretty wide spread in scores, and the trend line gives us an R-squared of 0.55. Here's how I interpret this graph - the poorer the area, the more money it takes to provide an education. If you compare a rich area with a poor area, it can take nearly double the amount of money to provide the same outcome in the poor area. 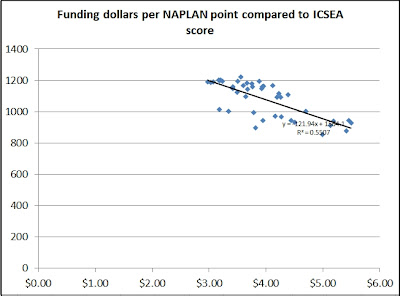 Here's the same graph, with the axes set to zero. I don't want you thinking that I'm manipulating things by playing with the axes. 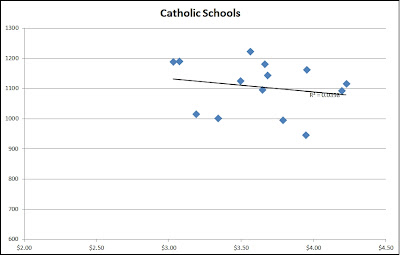 I then separated out the Catholic schools. The R-squared here is 0.0398 - in other words, there's bugger all correlation between the two variables. In Catholic-land, the wealth of an area has almost no impact on how much it costs the Micks to bash knowledge into poor kids and rich kids. 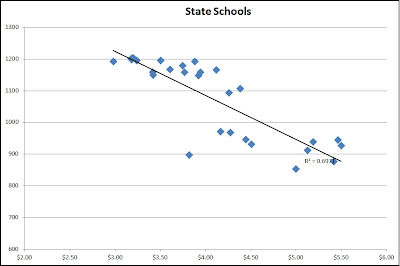 With state schools, it's an entirely different picture. The R-squared here is 0.69 - pretty bloody good in my books. You can also see a clear split between two sets of schools - an upper shoal and a lower shoal. 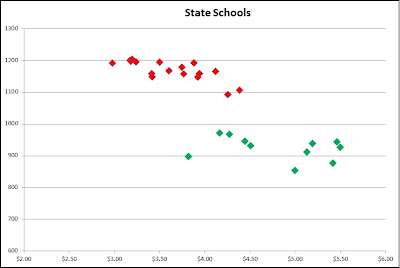 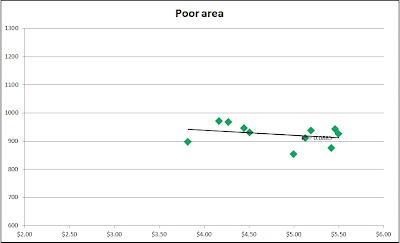 I've then broken the numbers out for the state schools and divided them into rich and poor zones. The R-squared for the poor group is 0.088 - it's rooted. However, a 5 order polynomial gets up to 0.6. 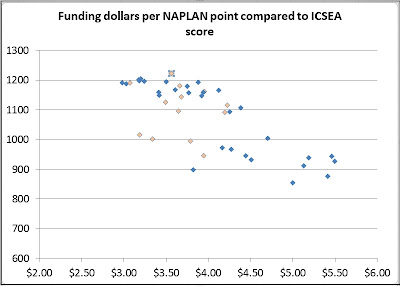 I've taken that graph again and coloured in the Catholic schools in orange. A strange colour for Catholics, I know. However, what it shows is that there isn't the same divide as you get in the state system.
What cracks me up about this is that the haters of non-state education love to say that private education creates a gulf between rich and poor. Well, perhaps it does - but the state system is no better. If anything, it might be worse. If you want to prove me wrong, go away and crunch the numbers and see what you can come up with. I went into this exercise with an open mind - I just wanted to throw some numbers around to see what came up. I have to say that I'm quite shocked at the results.
Badly proofread by Boy on a bike at Sunday, March 06, 2011

As professor whatshisname would say "Why is this so?"

BOAB
This process provides a clear example of how knowing more and more about less and less can lead to knowing everything about nothing. Or perhaps it's a clear case of paralysis by analysis.
Seriously, the difference in performance between Catholic and State schools based on the data you looked at is probably significant. I doubt, however that it has much to do with money - it's probably more a product of the differences between community and school values in the two cohorts.
The Catholic system does emphasise community and spirituality. They walk the talk. All my kids have spent time in both systems (as I did). When we lived in the bush, they went to state schools because there was nothing else. When we moved to the big smoke we enrolled them in parish schools. You notice the difference as a parent.
There is something to be said for a faith-based ethos as a lever to create strong and productive school communities.

I think you have absolutely banged the nail on the head - the more I look at the numbers, the more it comes down to the families in those communities and the school values. Money is to a large extent irrelevant.

I know what you mean by the Micks walking the walk - we did Mass last Sunday, and 95% of the teachers showed up and stuck around afterwards to talk to the parents and play with the kids. At our state high school, you're lucky to get a proper turn out for parent-teacher night, and they're all clock watching the entire time. 15% might turn out for a parent/teacher social event. The Principal uses buzz words like "learning community", but has no idea what a community actually looks like. The Micks know exactly what a community looks like (and sounds like on Sunday morning).

The Independent school that I went to didn't involve the parents much, but bloody hell, they inculcated a monstrous school spirit. The place was so thick with it, you could drink it. The culture of the place was very intense. It was a solid community, but of a different sort.