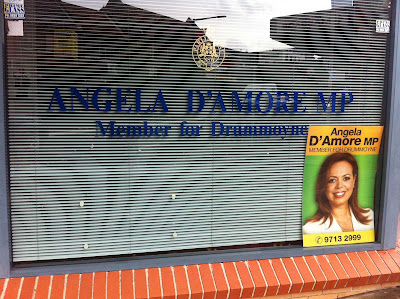 Angela D'Amore still has her office going, even though she won't be the local member any more in 2 1/2 weeks time. That's not preventing her from using up her printing allowance in a misguided attempt to puff up her legacy. By April 1, people will be saying, "Angela Who?" 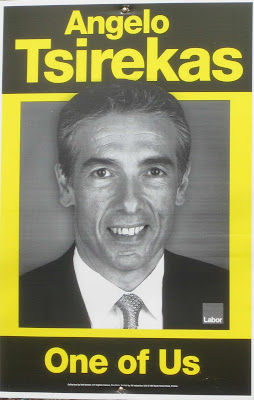 The alternative Angelo Tsirekas poster - the one that is not a leftover from a previous mayoral campaign. I don't get the use of slogans - "One of Us". What the hell does that mean? That he's not an alien from the Planet Zog? 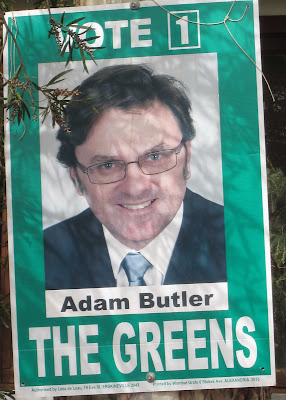 Found this in a backstreet - almost fell of the bike when I saw it. It's the only one I've seen so far. Adam - here's a hint. Get a haircut before your next formal photo session. My motto is, "Never trust a Green in a suit". That goes for business suit, lounge suit or koala suit. 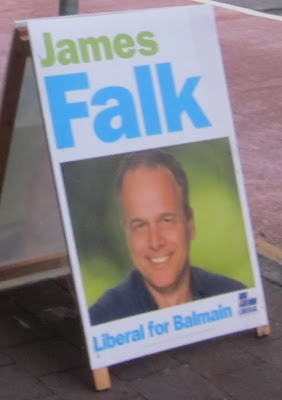 Ah, the missing poster from my last trawl - James Falk, the Liberal candidate for Balmain. We've heard very little about him in the media, because the media are obsessed with the battle between the Green and the Labortard. Poor old James gets no oxygen because he appears to be normal. My suggestion is that he takes drugs, crashes his car into a gay bar and then runs naked down the main street of Balmain with a flaming torch stuck up his bum. If he does that, he might cop a line in the local rag.
Badly proofread by Boy on a bike at Wednesday, March 09, 2011

Is it another one of those Labor posters?