What is wrong with people these days? Doesn't anyone know how to build a proper bomb anymore? Sheesh, after all the carbombs and such in Iraq and now Afghanisatan, you'd think nutters would have an idea of what it takes to reduce a car to its component parts.

Check out this car. 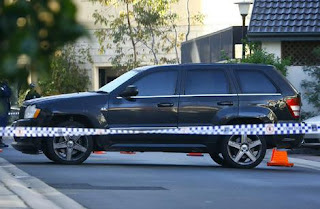 Apparently a pipe bomb has exploded under it.

Uh, right. More like a firecracker. Yes, it might have been a pipe bomb, but it looks like it had the power of a firecracker in it.

I once partook in some quite legitimate explosive undertakings that were used to clear old trees from a farm paddock, to blast stone in a quarry for use on a house, and to "tidy up" an old car that was "spoiling the view" in a rather large paddock.

This all happened because the Big T decided to get his Shotfirer's ticket. Since his job involved banging rocks together as a rockologist, he thought it would be fun to bang rocks together at high speed - say 5000 feet per second.

The Big T was short of transport at the time - I forget the reason. Drunk driving perhaps? Not enough moolah for a car? Whatever - I had to drive him to and from most of his lectures, which meant I got a 2nd hand education as a shotfirer. I listened to him recite the lessons, read all the course notes, and then got some hands on practice with detcord, detonators, fuses, dynamite and mixing ANFO. We used detcord to cut down trees that you could wrap your hands around, dynamite to blast stone in a quarry, dynamite to launch an enormous pine tree into orbit (it certainly seemed to lift off like an Atlas rocket when we blew it) and finally to "clear the view" in the top paddock.

I don't recall what the car was - probably an old Falcon, as in a 1960's model. I do seem to remember a 20 litre chemical drum (probably used to hold DDT) and a bucket load of ANFO. We used way, way, way too much ANFO. Like about 10 times too much - but the shotfirers manual never said, "Use x kgs of ANFO to separate a car".

I saw a photo the other day of explosives being used to disassemble a disable Hercules that had made a bad landing at an airport in Iraq and it needed to be chopped up to move it. There is sure to be a manual somewhere that tells you how much explosive to use and where to place it to chop the wings off a C-130. There might even be a pam somewhere that explains how to disect a 1960's Ford Falcon - but we didn't have it.

All that I will say is that part of the window winder mechanism landed something like 400m away. Until I got to fire the Carl Gustav, it was the loudest noise I'd ever experienced. It was one of those "oh shit" moments you get when you realise you have done something really silly.

Anyway, if I had been tasked with taking out this car, it would currently be scattered over 4 postcodes. What's happened to turn even our mad bombers into pussies?
Badly proofread by Boy on a bike at Friday, July 18, 2008