I will start by saying that I have not read the Garnaut report. The following is based on an interview with Garnaut that I heard on JJJ. He said something like:

Now it has been 20 years since I studied Economics, but even to a dim, lazy, C+ student like me, that sounds like economic illiteracy.

I am not going to wade through the report searching for a correction, because all I care about is what Garnaut is telling the public. If he is spouting bullshit on the radio, he deserves to be called on it.

I put together the following 2 graphs using made up numbers, but they serve to illustrate a point about how the output of CO2 should decline as the tax rate increases. I pulled these numbers out of my backside - economic modellers are paid lots of money to run these sorts of models on a supercomputer, using lots of numbers pulled from their backsides.

In the spirit of openness, I am publishing my model so that others can review it, modify it and use it as they wish, and also debate the underlying numbers and assumptions. Here it is, in all its glory. 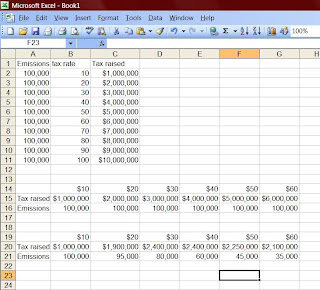 The statement made by Garnaut had to assume that emissions stay the same as the tax rate increases. In this case, I have assumed 100,000 tonnes of emissions per year to make the maths as simple as possible. If you double the tax rate from $10 to $20, the only way the total tax take can double is if emissions fail to decline by even one tonne. (You can pull out a calculator and prove this for yourself if you like).

I have extrapolated that here to show what the tax take would be like up to a carbon tax of $60 per tonne. Treasury would love it if this was how the real world functioned.

Which of course, it doesn't. 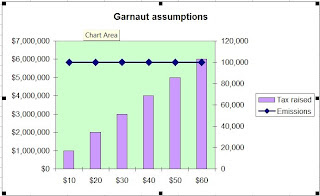 Simple Economics 100 (not 101) teaches us that as the price of something increases, demand decreases. (It also teaches us that there are some strange goods out there were demand increases as the price goes up. I can't remember what the term is for them, but think of Tiffany diamonds. No one wants a cheap one - call them status goods if you like).

Once again, I have pulled a set of numbers out of my backside to demonstrate that as the tax rate increases, demand (or emissions in this case) can behave in such a way that the total tax take starts to fall at some point. In my model, the total tax take peaks at $30 and then starts to decline when it hits $50, because emitting has become so expensive that output falls faster than the tax rate increases. 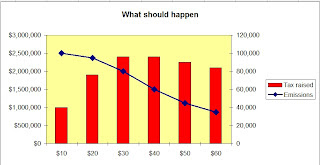 This sort of modelling is supposedly done by companies so that they can set the optimum price for their products. Charge too little for that hamburger, and you won't maximise your income. Charge too much for that hamburger, and total sales will fall. If I remember my Economics, the Laffer Curve described what happens when income taxes get too high - everyone shoots through to the Carribean, and the total tax take falls.

This is supposedly what happens in the real world when rational people make rational decisions. If something gets more expensive, a rational person consumes less of it, or switches to a close alternative (or substitute - all my Economic theory is starting to come back from the dark depths of my brain). If you don't understand that point, you have no conception of how the economy works.

But in Garnaut's world, increasing the tax rate has no effect on CO2 emissions. If that is the case, what is the point of a carbon tax at all?
Badly proofread by Boy on a bike at Friday, July 11, 2008

"I have pulled a set of numbers out of my backside"

That formula is called 'arse-pluck v'.

The goods that he's referring to are Veblen goods, not Giffen goods.

I should mention that I failed my last Economics half unit, so you lot are doing my head in.