I really have to respect this bloke. I took this photo on Friday as I was driving down Victoria Road into town. 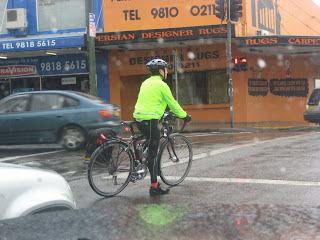 For starters, he is riding on Victoria Road, which is something that I would never do. It's three lanes of nasty traffic in each direction, and the hills are killers. There is nothing worse than trying to plod up a hill on a bike with 100 steaming car drivers behind you all wanting to get past.

The second reason is that it is pouring with rain at this point, and it was only about 11 degrees. Yes, he is dressed for the weather, but it is still an evil time to be out on a bike.

Here's the curious thing for those that say driving is such a quick way to get from A to B. I took this photo at Balmain. I didn't catch this bloke until we got to the middle of the Anzac Bridge, and that's only because the bridge is quite steep and all cyclists slow down quite markedly when they get to it.

This guy has some balls. Except that they are probably now blue, small and hard to find.
Badly proofread by Boy on a bike at Saturday, July 05, 2008