The postie arrived around 1pm yesterday with a present for me - a wireless high definition multimedia player from zazz. 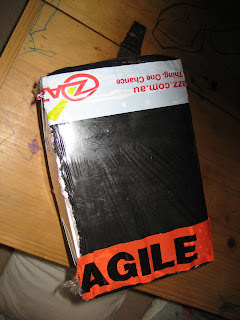 The idea behind spending $300 on this gadget is so that I can reduce the number of times I have to swap DVD's in and out of our DVD player. I know that sounds horrendously lazy, but when you have a Monkey that likes to watch a bit of the Wiggles, then a bit of Thomas the Tank Engine, and then a bit of Bananas in Pyjamas, then you'll understand where I am coming from. My idea is to rip all our DVD's, plonk them on the big hard drive in the MediaGate and forget about ever opening the DVD cupboard ever again.

At least that was the theory. 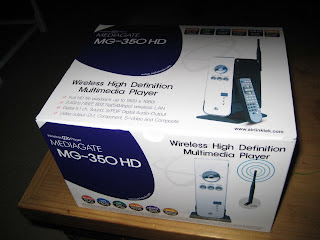 To start with, the manual is 50% useless. It fails to mention Vista even once, which is a problem since that is what most of our home computers are now running. You can download a more up to date manual from the airlinktek.com website that mentions Vista, but that's a bit bloody stupid given that Vista has been on the market for a year and this thing probably went into the box in China only a week ago.

So this manual can go in the bin. 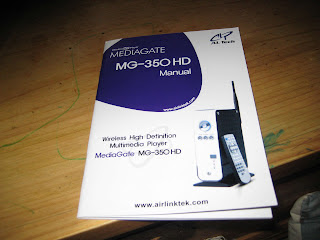 Don't know - haven't managed to get it fully setup yet. I bought it because it is wireless, thus hoping that I could stick the MediaGate in the lounge room and use the ether to copy movies from my PC to the gadget. Well, that might be possible if your PC is running XP or Windows 2000 - maybe even Windows 98 - but Vista is not having a bar of it. The only way to get things onto the hard drive is to plug in a good old USB cable, which means the MediaGate is still sitting in the office on my desk whilst I rip DVD's and copy them across the wire.

If we had a LAN in the house, I could just plug it into an ethernet cable in the lounge room, but we haven't got that far yet. I have been hoping to avoid stringing cables from one end of the house to the other.

The remote control is a joke. The interface - well, let me just point out that it was designed by some Chinese people who are very good at putting hardware together but are hopeless at software development. Yugio is more comprehensible than the interface.

You can stream stuff off your PC, eliminating the need to copy stuff to the gadget, but that means a wait whilst it buffers up some of whatever it is you want to watch..... and I lack the patience for that. It also means your PC has to be on all the time, and it also means having a hard drive stuffed full of cartoons for the kids. I'd rather have my PC clear of all that stuff and have all the watchable stuff on the gadget.

I get the feeling that it is also going to look horrible when viewed on our old fashioned CRT TV.

Would I buy another one?