I had nothing better to do yesterday than sit in our local mall and watch two Greenpeace "annoyers" try to drum up business from my fellow Five Woggers.

They didn't have much luck. 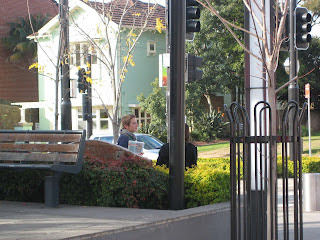 Last week, Greenpeace was stupid enough to send two feral looking hippies with dirty dreadlocks into Five Wog to try and sign up a few whale hugging members. That went down like a lead balloon - this is the sort of area where it is still reasonably common to see men walking around in suits, with or without a tie, and they aren't going to work. They're just out attending to their daily business. Although this electorate voted strongly Labor at the last election, my gut belief is that most of them are the old style blue collar Labor voters, rather than the basket weaving, middle class, latte drinking teachers that have been wrecking the party of the working class since the late 1960's.

I sat and watched this pair for 10 minutes (sorry about the lousy quality of the photo - I was trying to capture the slogan on the back of their shirts) and they failed to engage with a single pedestrian. I watched people walk right out to the edge of the footpath to avoid them. I saw someone cross the road to avoid them. I laughed as people pulled out mobile phones and made imaginary phone calls.

The classic was the old Italian bloke, who looked like an extra from the Godfather, who was one step away from needing a walking frame and was thus unable to get away from them - he simply started jabbering at them in Italian, asking directions to the supermarket (which was right in front of him), which left them completely lost. Imagine that - sending Irish backpacker annoyers to a suburb where more people speak Italian and Greek on the streets than English.

How's that for cluelessness?

If we were a few suburbs across in Balmain, these two would have been swamped with tilty headed fellow syncophants who would already be Greenpeace members. I reckon you'd be hard pressed to find even a single Greenpeace member in the entire 2046 postcode. The people who live here either grew up in poverty on a farm in Greece or Italy or Yugoslavia, or are one generation removed from that, and they are the type that are not squeamish about killing and gutting chickens and pigs and things like that. Talk to them about being nice to whales and they'll give you a look that signifies that you've been out in the sun too long without a hat.
Badly proofread by Boy on a bike at Friday, July 18, 2008