Had a very odd experience at the shops today.
Correction - make that two.
First one was that I was the only adult in the entire mall without a visible tattoo. I have long harbored the thought that publicly visible tattoos belong on three classes of people - sailors, criminals and prostitutes. I wish they had stayed that way. I was looking at the hipsters in their Green Day type black T-shirts with their Green Day type tattoos as they fed a banana to their 18 month old offspring; and I wondered, when they were getting inked up and hip, did they think they would be standing around in a mall a few years later feeding fruit to their offspring whilst their better half went nappy shopping? Life as a middle aged hipster must truly suck. 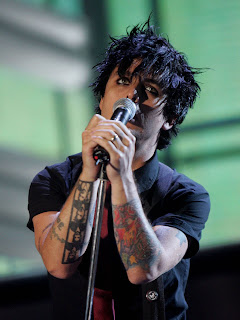 Second one was the mathematical ignorance of the masses. The woman in front of me at the checkout was buying three items at $5.69 each. The checkout chick (who happened to be a bloke) fed them through the scanner and announced that the total owing was seventeen dollars and five cents (the 7 being rounded down due to Australia no longer having one and two cent coins).
The woman became very agitated, and announced that "The price must be fifteen dollars something, as she bought three items for five dollars something".
It took me about one second to verify in my head that the cash register was in fact correct, and the woman was a moron. On closer inspection, she had a prison-type tattoo stating "nick" on one arm (a very ex-lover?) and a couple of other prison-type tats on the other arm. I reckon she was in her late 30's, but looked like she was late 40's. She had the shakes too - perhaps the effects of long term drug abuse?
The check out bloke restated the amount, took the offered twenty and gave her back the correct change. She collected her items, then stood at the end of the checkout adding up the change in her hand and looking at her receipt and visibly shaking. I could tell she was waiting for me to finish my transaction before launching into the checkout bloke. It was plain as day what was coming. I paid up and shot through, declining to get involved.
The thing is, at least she was able to multiply 3 times 5, which is more than most high school students can achieve today.
Badly proofread by Boy on a bike at Saturday, January 23, 2010

Next time you go shopping take a stick with you and belt the dummos over the head.

Mental arithmetic - it's a physical thing.

Dealing with inbreds like this one is almost a weekly occurrence for me. I wonder if the shaking was due to mental overload or the crack was kicking in